After a sunny start, Perth Road Runners had a rapidly cooling afternoon and threatening rain clouds to contend with when they took on the second event in the Club

Championships on Saturday 1st March in the Cupar 5. The rain held off and the

course proved to be quite fast for the time of year, despite the potholes, (well marked!) with some good times posted.

David Hunter was first Perth runner home with a 29:03 giving him 21st overall in the field. Stuart Robertson was next in with another ‘sub 30’ in a time of 29:52. The Perth men’s top three was completed by Duncan Ryan with a strong 30:20. Over the next 2 minutes another 5 green vests crossed the line with strong performances from Michael Wilson in 30:57, James Fotheringham 31:17, Mark Leach 31:53, Derek McIntosh 32:07 and Grant Wooler 32:43.

The first three Perth ladies home were Angela Irving 32:54, Julie Ramsay 33:30 and Nicola Crowe 33:58. Colin McCreath put down another fine time of 33.35. Less than 20 seconds separated Fiona Angus and Barry Campbell finishing at 35:26 and 35:41 respectively. Peter Ritchie and Hugh Daly were almost inseparable, placing 99th and 100th at 36:01 and 36:07 respectively. The training miles were rewarded for Joan Wilson and Melanie Macrae with strong performances at 36:30 and 36:50 and Allison Brown less than a minute later at 37:49. Amy Greig and Bob Brown crossed the line together at 38:20. Bob, fresh from his 127th marathon performance in Malta, secured another record as first male veteran over 70.

Club members are reminded that the Tay Ten trial run is taking place on Sunday 9th March at 11am from the back gate at the George Duncan Athletics Track. Come along and run, or cycle, all or part of the route, the more the merrier!

After a solid training programme over the winter, a number of Perth Road Runners have been on the move in recent weeks to test their early season form.  The first spring races are also an ideal training ground for forthcoming marathons, especially London and Edinburgh.

On a dry and cold day three green vests took part in the Lasswade 10 mile Road Race.  The race is held over a testing course in Midlothian, a scenic rural loop run mainly on B and C class roads.  First home for Perth was Simon Grieshaber in a strong 77:21.  After completing the Cupar 5 the day before, Sue Jones and Beth Gripton romped home in 82:32 and 87:34 respectively.

In what has become a popular fixture on the running calendar, six PRRs headed north for the 30th anniversary Inverness Half Marathon. In a field of 1,700 runners, in windy but fairly dry conditions, Ewan Jelly led the Perth contenders home in 01:39:24.  Under 90 seconds later Hamish Shankland put in an impressive 01:40:44.  Hugh Daly was in good form with another fine run of 01:44:00.  Mel Macrae led the ladies trio home for Perth in a strong 1:43:40.  Susie Lockett beat her previous PB by 20 seconds to finish in a storming 1:45:59.  In only her second half marathon, Kirsty Johnston “loved it” and was home in a respectable 2:27:49.

Closer to home, record numbers of PRRs have been honing their PBs in the Perth Parkrun over the first two Saturdays in March.  In the latest fixture, Greg Simpson placed first overall in an excellent 17:47.  Sue Jones, a Parkrun first timer, led the PRR ladies home in 27.33.  Karen Walters achieved another ‘sub 30’ in a time of 29:32 while Fiona Morrison achieved an event PB at 32:38.  The previous week, Greg Simpson achieved another first place finish and a superb PB of 17.28.  Less than 20 seconds separated Grant Strachan and Barry Campbell with new PBs of 20:33 and 20.59 respectively. At only 2 seconds outside his event PB, Richard Ward was the next home for Perth at 22:35, with Parkrun regular Kenneth Stewart crossing the line with a new PB of 22:58.  Two more PBs followed from James Fotheringham with a ‘sub 25’ 24:00 and a strong 28:00 for Leah Menzies.  Other Perth contenders were Linton Scarborough 31:37, Rhona McBean 32:51 and Joan Wilson volunteer tail runner. 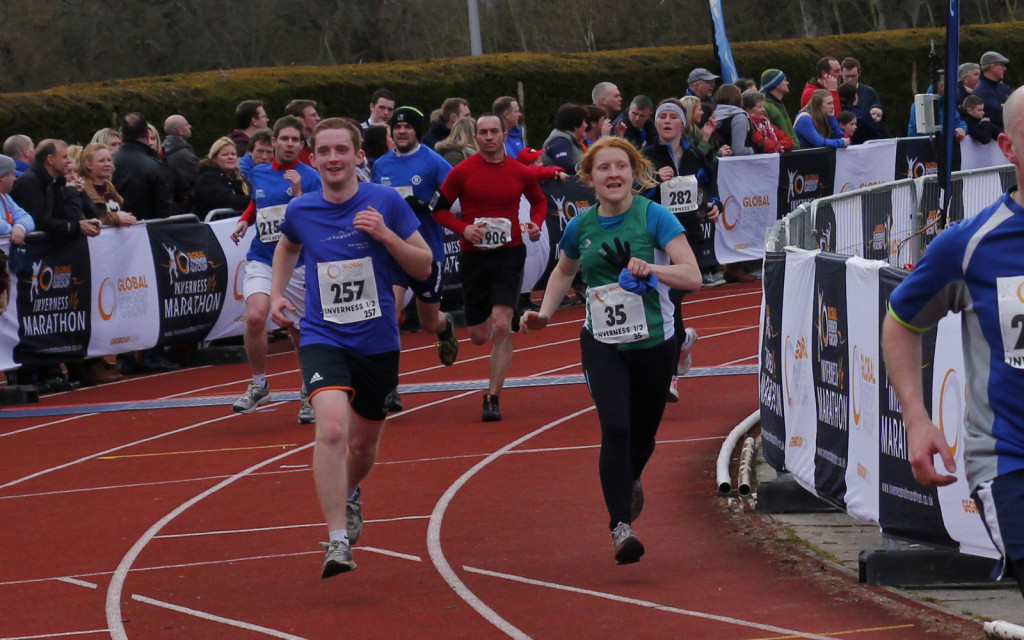 The spring races across the country continued to attract PRRs over recent weekends with a few notable performances. Peter Ritchie was Perth’s representative travelling West on 9th March to race the Balloch to Clydebank Half Marathon. After a wet start, on an undulating course, Peter secured a solid 1.46.53 and bagged another tee shirt for his collection.

On 15th March two green vests joined over three hundred top ultra-distance athletes from all over Scotland taking part in a major event in the North East.  The D-33 is a 33-mile race from Aberdeen to Banchory and then back again to Aberdeen along the Deeside Way.  Perth’s Andrew Lochhead placed 13th overall in a superb 4:04:46.  Barry Campbell completed the honours for Perth in a strong 5:37:00 building endurance for the London marathon.

Another popular fixture in the racing calendar, the 32nd Alloa Half Marathon drew another five PRRs. In a field of over 1500 runners, Duncan Ryan was the first man home for Perth placing in the top 100 with a strong 01:25:12. Next over the line for Perth was Peter Ritchie with a competitive 01:41:56, shaving 3 minutes off his performance in Alloa the previous year. Kenneth Stewart’s winter trained paid off as he romped home in a spectacular sub 01:50 time of 01:48:38, achieving his best half marathon time for 2 years.  Having completed a seven mile training run just before the race, the first Perth lady across the line was Beth Gripton in a superb 01:56:14. Debbie Jackson completed the Perth ladies duo in 02:01:18, using the race as a training run for the London marathon.

Closer to home club members have been the trialling the course for the exciting new 10 mile road race – The Tay Ten.  The runners reported a flat, fast course with great potential for PBs.  The inaugural race will take place on 6 April 2014 with an 11am start.   Entries from Entry Central online only.  Further information on The Tay Ten is available on PRRs website www.perthroadrunners.co.uk.

If you are interested in becoming a member of Perth Road Runners please visit us at www.perthroadrunners.co.uk. We are also on Facebook.