The Yahoo is Perth Road Runners’ annual handicap race. It was first run in 1983, and its 2021 renewal (held early in 2022) was the 37th fixture. It is traditionally held in the ten days or so before Christmas, although has occasionally been delayed into the early New Year where necessary. A Christmas race it may be, but some of the most competitive performances from PRRs occur at this race in the final scrap around the North Inch for Yahoo glory.

As a handicap race, it seeks to provide an even contest for all participants, sending more leisurely runners on their way before the later-starting elite runners. The contest is held over a 9½-mile course around Perth (containing some infamously steep slopes in Craigie; see below for more details). The first runner over the line on the North Inch takes the mighty and massive trophy for which the Yahoo has become famous/notorious. 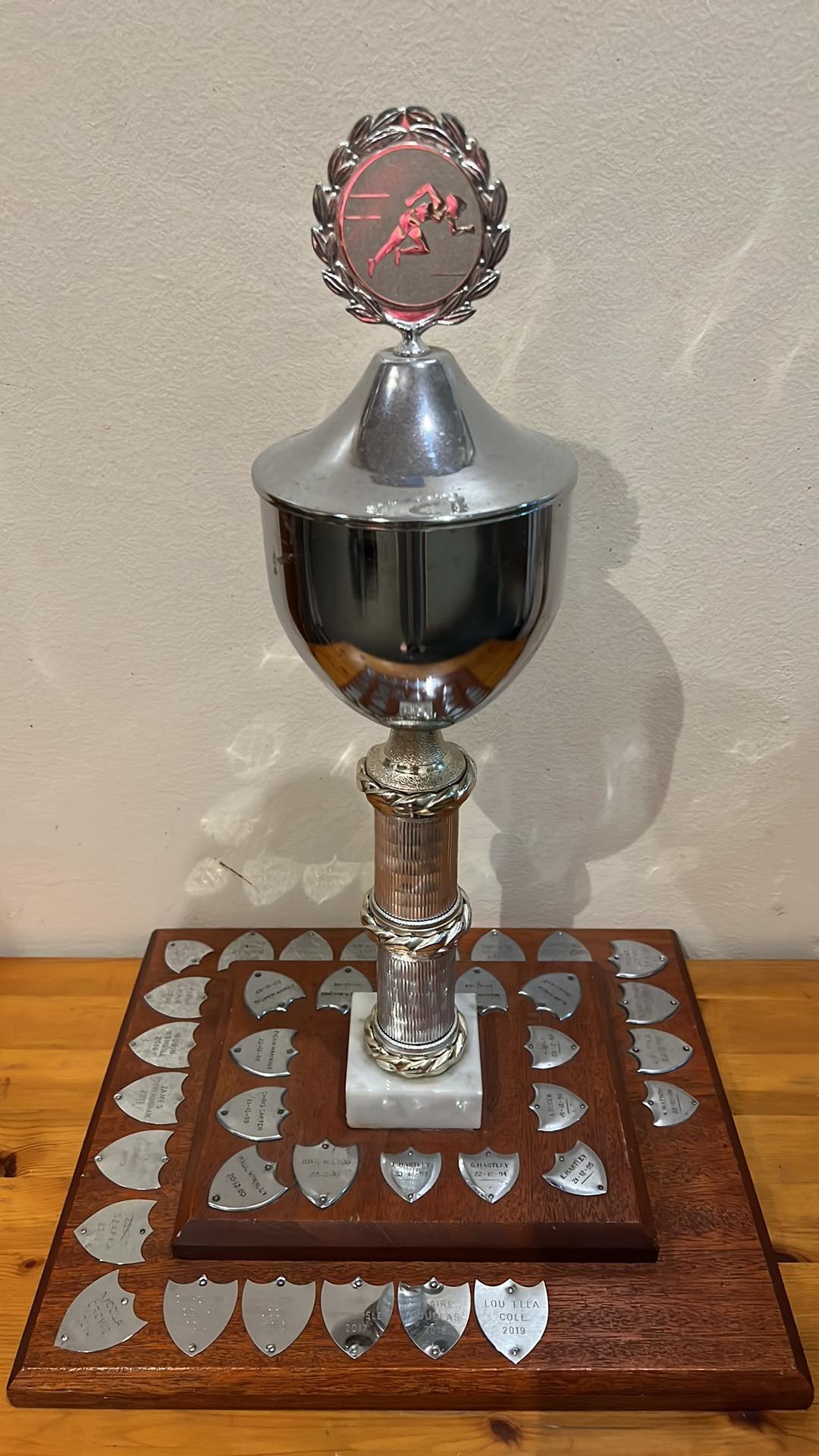 As to the history of the trophy, Club stalwart Neil Muir relates that “the trophy was donated to a group of athletes from Perth Strathtay Harriers alongside a small number of PRRs on a visit to Aschaffenburg [Perth’s twin town in Bavaria, S Germany] in the eighties. The trophy was competed for between the Aschaffenburg athletes and the Perth athletes with the German athletes visiting Perth at a later date. It was then decided that the trophy would become the trophy for the Yahoo. The Yahoo came about as the route was often used by the Harriers as a training route and decided to make it a Christmas club race and called it the Yahoo as a bit of a laugh.”

A trophy is also awarded to the fastest time recorded over the course by both male and female athletes. Records of course times are not well kept; so far, I’ve struggled to find anything faster than the times posted by James Waldie and Rhiannon Laing in 2021 (although the course is now marginally shorter by dint of the newly-introduced and controversial Peri-Peri Shortcut).

The handicap itself is always a talking point, as it shapes the final winner and finishing order every bit as much as fine runs from athletes. Until recently, participants were invited to submit estimates of the times they would achieve over the course. However, these estimates inevitably involved a major element of conservative ‘sandbagging’, giving each athlete a rather higher chance of a win. What then emerges is something of an arms race in which estimates become more and more wayward. The practice of self-estimating was eliminated in the 2021 race in favour of a data-based, independent (if such a thing is possible) and mathematical stab at the handicap.

Viewed historically, Yahoo winners seldom emerge from the slowest end of the handicap and almost never from the fast end: winners typically tend to be saddled with a middling handicap. They are often new to the race, making it tricky for the handicappers/organisers to assess their likely performance. Once performance capability over the course is known, it is hard to escape the grip of the handicap. Consequently, only one athlete has ever won the handicap trophy twice; for that, you need to look back to E. Hartley in 1993 and 1995!

The 2021 race saw 31 runners go to post, depleted from almost 40 in the handicap by last-minute COVID-19 isolations. Maria Dale set off some 33½ mins ahead of James Waldie, these two book-ending the handicap. Caroline Duffin, starting third (and ultimately finishing third), held the lead-on-the-road all the way from Rannoch Road to Tay Street, but was there overtaken by debutant Elliot Collins, who went on to cross the finish line first, around 1’40” ahead of last-to-leave James Waldie, whose titanic run through the field (in 51’56”) was thwarted by just one runner and saw him comfortably take the fastest male trophy (from Stuart Robertson, whose name had appeared thereupon for the last three runnings). Fastest female was Yahoo debutante Rhiannon Laing in a very fast 70’16”, which also saw her cross the line in fourth place.

The next Yahoo will be held on 13th December 2022. There has long been a tradition to selectively invite known, historically-PRR-connected runners from other clubs, and we hope to see them and you then!