Martin Ryan who died tragically in July of this year (2007), was respected and liked in equal measure he was a great training partner, a very fine runner and a good friend.

As I did a bit of background for this I was surprised to discover that it was only three years since Martin joined the Roadrunners, I would have sworn he had been part of the fabric of our club for so much longer than that but I suppose that’s just a measure of his commitment and contribution to the club, both as a personality and a competitor.

Along with the other Tuesday night training regulars, I guess we took it a bit for granted that Martin would be down for training, week after week after week – he rarely missed a session and he was up for anything. I don’t think I ever heard him baulk at any of the programmes that were suggested, but then why would he? When it came to running there wasn’t much he couldn’t handle – and what’s more he usually took it all quite literally – in his stride.

Martin was essentially a quiet presence, and it has to be said, to look at – in his nineteen-eighty- something Dundee Marathon t-shirt or his Blairgowrie Half Marathon hoodie of the same vintage, not the most athletic of figures – but then the pipe probably had something to do with that.
Even running… in the first mile or so of a race Martin just seemed to be jogging, but then like most of those who are very good at what they do, he made it look easy – he had an effortless, economic, running style – almost imperceptibly he’d begin to pull away and within another mile or two he’d have disappeared off into the distance. An absolute text-book example of how to pace an endurance race, and he could deliver exceptional performances at virtually any distance; 5 miles, 10k, ½ Marathon.

However, it was over the Marathon distance that Martin’s extraordinary physical fitness and mental resolve really shone through.

Just in case anyone is in any doubt as to just what an exceptional runner Martin was, there are very few runners of any age capable of a sub three hour marathon let alone a time of 2:44:07. Although this was by no means his fastest marathon time it must rank as one of his most impressive given that he ran that time just two years ago firmly in the super-vet category.

This tribute to Martin would be incomplete without some of the statistics that underline just what a good athlete Martin was and Robin Wombill from the club has very kindly compiled Martin’s race results from his time as a Perth Roadrunner.

Martin wasn’t a member for long but has left us with many memories. A man with a PB of 2:35:00 for the marathon when younger he didn’t let age dull his edge. 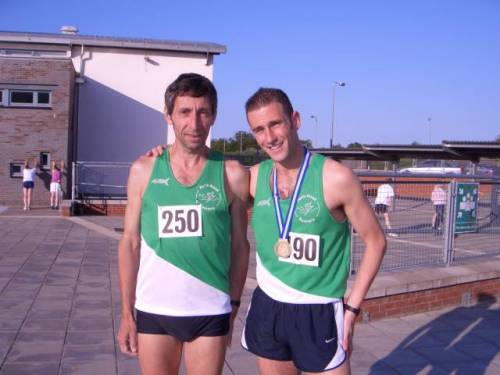 2007
This is where Martin’s strength of character becomes evident – by most of our standards pretty good times – but not great when you look at what he was capable of – nevertheless he stuck at it despite having to pull up in several races.
Cupar 5 – 31:19 (5 mile)
Alloa – 88:46 (half marathon)
In May he ran the full length of the Cateran Trail – completing the gruelling 23 mile course in 3:49:57
Loch Leven – 88:26 (half marathon)
Milnathort Dash – 33:15
And shortly before he died it looked like he was beginning to turn it round. The last race Martin completed as a member was our own Brig Bash on 4th July where he was 2nd Super Vet with an impressive 29:14 – 20th place overall. 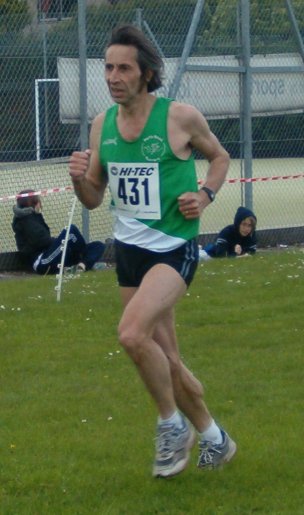 Martin brought other talents to the club, earlier this year he joined the committee and assumed the role of Club reporter and like everything else he did, he did this job in his own idiosyncratic way.

Martin’s race reports often had another dimension, he could obviously write and they read like he enjoyed writing them, but typically, not content just to list runners names and times Martin would report on other performances that had impressed him (not necessarily Perth Roadrunners) he’d add a bit of pre-race scene setting; a bit about the weather, a comment on the course, if there had been a close contest between a couple of club runners he’d inject some drama into the report and then, tucked in away amongst the obligatory list of names and times, invariably the scant details of another excellent performance on his part.

Of course there was more to Martin than just running. Like many good things in life his qualities were revealed gradually. He and I spent many hours running the roads and tracks around Perth and it was on those longer runs that I began to appreciate just how well-read, thoughtful and intelligent he was.

I hope you have had the pleasure of conversations like those we had, you know where you meander around all sorts of diverse subjects; the family, football (well Dundee United), leaping off at tangents into local history or a favourite of his – good pubs, and it all made perfect sense. Martin was great company on a long run – and you usually learned something from him, out of nowhere he’d come out with a quote, usually verbatim, from Coleridge, Kipling, Burns or perhaps a bit of chess theory to illustrate a point – I now understand why chess players will spend hours analysing a match they’ve just won or lost and, vaguely, the principle of a Sicilian Defence, and Martin’s explanation certainly helped to take my mind off the pain of trying to match his pace.
You were never bored on a run with Martin and it always helped to shorten the distance -well psychologically anyway.

I think it’s safe to say, Martin was a character in the best sense of that word – “character” can often be a euphemism for abrasive and attention seeking – Martin was the exact opposite; easy-going and circumspect. Everyone I have spoken to from the Roadrunners in the past weeks has had some anecdote to relate about Martin – and in all of them the same characteristics kept coming through; considerate, self-deprecating, gentle good humour, mildly eccentric, thoughtful and modest.

That last quality, modesty, was a key part of Martin’s personality, but then he didn’t need to prove anything on the road, his running spoke for itself. Indeed, the only time I felt that Martin would let that innate modesty slip was when he spoke, as he often did about Carol and Laura. He was clearly proud of the girls and took a real delight in their achievements recounting their musical, acting and dancing talents as well as the various shows, concerts, performances and chess tournaments that Carol and Laura were involved in.

He also obviously enjoyed the company of his older daughters Nicola and Deborah, and I think I’ve got them to thank for the one and only time I beat Martin in a race.

This was our club cross country race earlier in the year, scheduled for something like ten o’clock on a cold Saturday morning in February. Martin arrived with about ½ an hour to go, looking, I have to say, a bit rougher than usual but clearly in a good mood – singing Beatles songs to himself as we jogged around by way of a warm-up. As we chatted the reason for his high spirits became clear, Deborah and Nicola had been up to visit and stayed over, I gathered they’d all been up all night “talking”, but Martin wasn’t going to let a few beers and no sleep put him off running – there was a race to be run so he ran it – and I beat him that day – not by much – and not exactly fair and square I grant you, but probably the only way I was ever going to beat him.

To sum this up I think I would simply state that Martin was one of us, he had his faults I’m sure – and some weird and wonderful expressions – the words “bonny”, “braw” and “lass” did sound strange in what was left of his soft midlands accent but he was sincere in his love of Scotland so he could get away with stuff like that.

He was almost certainly our most reliable runner in recent years, always there for training and then at races all over the country often getting there the hard way via public transport.

The stark reality of this tragic loss has become apparent as the club championship reaches its conclusion and the cross country season gets under way – with each race there’s something missing – a slight figure in a green vest and very short, shorts – and that distinctive easy gait running off into the distance. He should be there – he would have been there – and it just isn’t the same without him. Our lives are enriched by small things; kindnesses, throw-away jokes, a good word here or there, a wry raised eyebrow or a great big grin – it takes all sorts to make the world and we need more people like Martin in it – not less.

It was a privilege to run with Martin and to count him as a friend – and I know I speak for all the Roadrunners – his quiet reassuring presence, his steady pace and his ready wit will be badly missed at the club.