As runners descended upon London, the running community, was in a state of shock and disbelief. On Sunday 21st of April, the Virgin London Marathon 2013 would provide an occasion for the running community to send a message of solidarity to the City of Boston, and to remember those affected by the attacks which occurred close to the finishing line of the Boston Marathon. As a mark of respect runners held a 30 second silence to remember those affected.

Perth was represented by a trio of Green vested runners on the day, each had their own goal, their own reasons for running. Brian Cooper put down a storming performance, passing the 13.1 mile marker in just 01:27:25, he arrived to finish down the Mall in a time of 03:08:28. Susie Locket secured her place and through the winter months stuck to a ridged training plan and would reap the rewards on the day. Susie passed the half way point in a solid time of 01:53:46 and deservedly crossed the finishing line 03:54:01, well under the 4 hour mark. Caroline Ness put in another good performance for Perth Road Runners. Caroline ran through 13.1 miles in 02:31:45, finishing strongly Caroline was rewarded with a sub 5.30 time of 05:27:06.

Meanwhile in Scotland…horizontal rain and strong winds made for a strenuous test for runners who turned out at Monikie Country Park, for the Angus HAM Half Marathon. 13.1 miles of undulation and beautiful scenery however were enough to focus the mind of those participating, especially of those who knew the test that lay ahead in the final 3 miles uphill. Perths sole representative on this ocassion Chris Paton finished in a time of 01:44:41.

Alyson Macpherson will be representing PRR on Saturday 27th April at the Hoka Highland Fling, a 53 mile multi-terrain ultra marathon on the West Highland way from Milngavie to Tyndrum.

Sorry, no London photos….as yet!

It was to be a noteworthy debut performance at the 2013 Blackpool Marathon held on Sunday 7th of April, for Barry Campbell of Perth Road Runners. Following a strong run along the Lancashire coast, past some familiar landmarks including the Blackpool Tower, Barry crossed the line in a superb time of 03:26:44, and just outside the top 100 finishing in 108, a job well done!

Ewan Taylor, this time sporting the colours of Perth United CC, stormed to victory at the Ayr Duathlon on Sunday 14th of April. Finishing in an overall time of 01:26:10, Ewan was 2 minutes clear of 2nd placed, Gordon Durnan, of Fusion triathlon Club.

The roof was brought down on Edinburgh as the Rock and Roll Half Marathon brought the spectacle of Rock and Roll performances from Madison, The Extracts and headlined act Franco, and road running to the City on Sunday 14th of April. Steven Bonthrone put in a fine performance with a 01:35:22 PB and was followed by Barry Cambell, who fresh from his marathon debut put in a time of 1:36:15. Allison McArthur narrowly missed out on sub 2 hours with a time of 02:02:15.

The Lochaber Marathon is eagerly anticipated by many as a fixture in the Scottish running calendar with the potential to produce a number of notable performances and is a favourite with many for its PB potential. PRR’s, Nicola Crowe, finished with a fantastic time of 03:37:39, ahead of Sue Jones who crossed the line in 03:49:38.

Perth Road Runners will once again be represented in London on Sunday for the 2013 Virgin London Marathon, which is sure to be another fantastic and enthralling spectacle for runners and spectators alike. Good luck to all our runners!

No photos to attach on this occasion, sorry!

Basking in gloriously warm weather and a scorching sun, they might have been, had it been 2012! Conditions in 2013 however, were some what decidedly more Arctic then Mediterranean for the Newtonmore 10 Mile Road Race. Those who were brave enough took on the conditions and that was just to get there! The race itself was another matter, and one which was going ahead despite the inclement conditions runners would have to endure. Perth were well represented in the Highlands and it wasn’t too difficult to spot a Green vest out on the road despite the snowy conditions. Stuart Robertson ran a superb race finishing in 7th place overall in a time of 1:00:47. Derek McIntosh and Steve Ferguson were almost inseparable and battled it out for 16th and 17th place finished respectively in a time of 1:05:32 and 1:05:35. James Fotheringham was a mere 25secs behind them in a time of 1:06:00 just sneaking into the top 20 runners. Another pair in Zsolt Szarka and Barry Campbell were fighting it out on the course and could only be seperated by 15secs in the end finishing in 1:09:13 and 1:09:28 respectively. Nicola Crowe was the first of PRRs ladies to cross the line in 1:11:16, Fiona Maclean was just a minute down in 1:12:54 whilst Robert Brown completed a strong race in 1:14:02. Allison Brown was next to cross the line in the PRR vest in 1:16:24 and with that Perth’s Ladies took 1st place Ladies team prize, narrowly beating Hunters Bog Trotters. Jodi Smega finished her battle with the elements in a time of 1:18:24. Pete Ritchie and Hugh Daly had their own battle to contend with and finished in 1:22:01 and 1:22:25 respectively. Kenneth Stewart crept under 1:30 to finish in a time of 1:29:31 whilst Fiona Morrison finished in 1:51:43.

Perth’s Green vested runners had also travelled North the previous weekend for the 2013 Inverness Half Marathon, and there were some notable performances on the day. Myles Bax having recently joined up with PRR is fast becoming a name to be reckoned with. A fine performance at the Scottish National Cross Country was followed up with a 1:18:01 and 26th place overall in Inverness, just ahead of Greg Simpson in 1:19:33. Michael Wilson ran a very strong race and was home in 1:24:03. Sue Jones certainly put in the training miles and was rewarded with a time of 1:46:49.

Perth Road Runners have been busy in action across the country in recent weeks, and there have been a few notable performances too!

On Saturday the 23rd of February PRR was represented at Callendar Park, Falkirk for the 2013 Scottish Athletics, Scottish National Cross Country Championship. 2013 saw the largest field in the senior men’s race for over 16 years. Myles Bax led the trio of Perth runners completing the 12km course in a superb time of 45.03, just grabbing a top 100 spot. Steve Bonthrone was behind in a strong time of 55.49, ahead of Chris Paton in a time of 56.29. On a cold but otherwise sunny day in Falkirk the course held up well and was firm under foot despite the thousands of runners across the day. Another truly great event on behalf of Scottish Athletics.

Perth were well represented at the Devilla 15k trail race on the 24th February, conditions on the day were good and there was a strong field of 450 runners.

Ewan Taylor ran a time of 56.03 finishing 1st overall. Brian Cooper clocked an impressive time of 59.42, finishing just outside the top 10 in 13th place. Neil Muir ran a strong time of 66.03 placing 43rd. Robin Wombill made another outing in the PRR vest an put down another fine run in 1.53.09 alongside Fiona Morrison in 1.53.10. The PRR team described the event as being a superbly well organised race and a great course.

Neil Muir made another appearance in the Perth vest and this time ran a time of 41.14 placing 13th overall and 1st supervet at the Buchlivy 10k 3rd of March, well done Neil!

This race was previously cancelled in January due to icy conditions, however conditions on the day were almost perfect for the field of 150 runners. The course included a mix

of road and forest trail although predominately forest, and was described as another very well organised race.

Sorry, no photos to accompany this article. 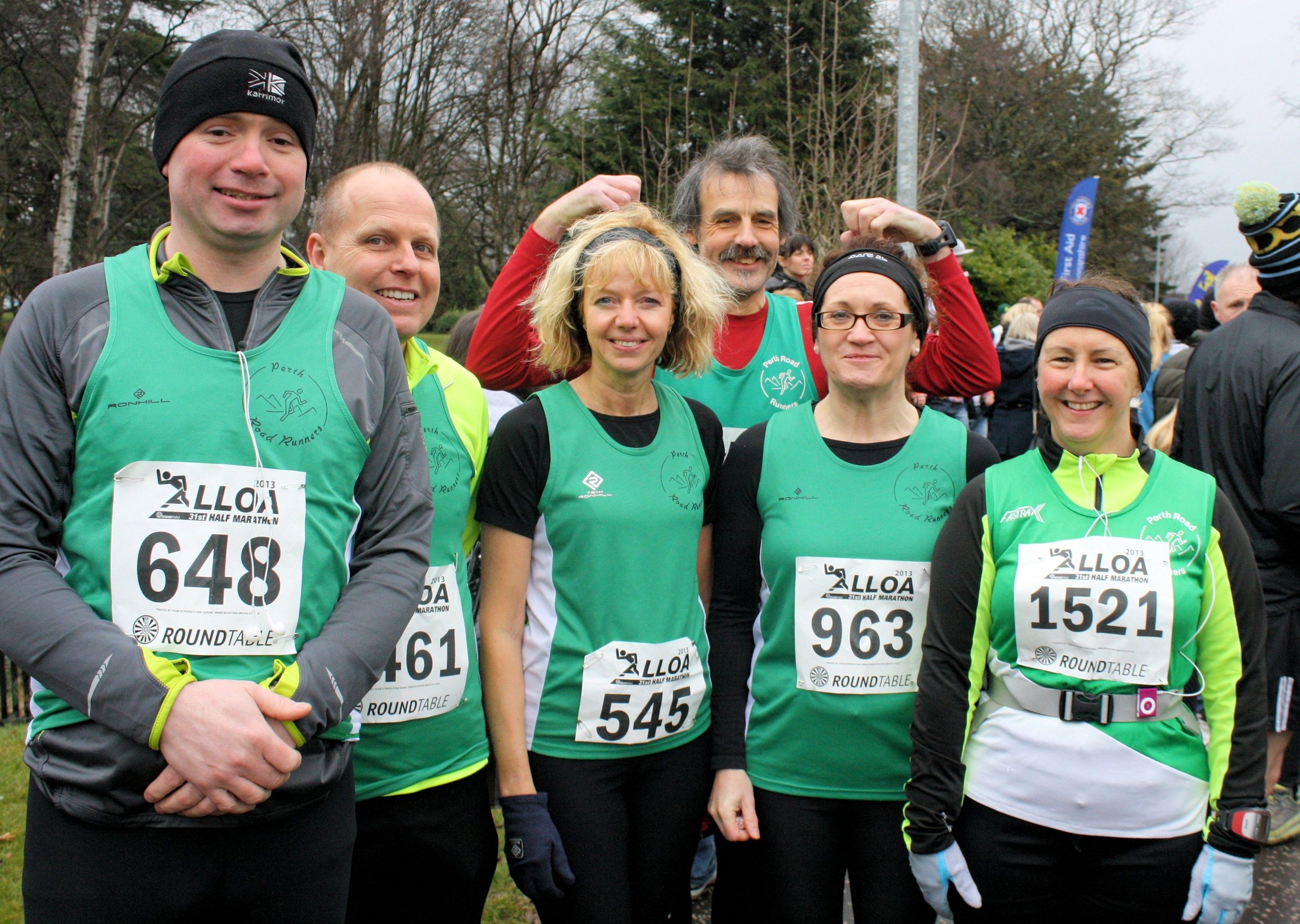 Sunday the 17th of March saw the running of the 31st Alloa Half Marathon, a day in which true grit was required to battle the elements and cross the finishing line.

A favourite amongst many Perth Road Runners, there was a good turn out from the club on the day. Stuart Robertson lead Perth’s Green vested runners around the course finishing in a time of 1:21:45. Derek McIntosh put in a fine performance finishing sub 1:30 in a time of 1:28:16. Duncan Ryan was the next fastest runner from PRR finishing in a time of 1:33:22 with Barry Campbell finishing close behind in 1:34:39. Fiona Angus was the first of the Perth ladies to finish with a time of 1:36:45. Bob Brown once again on fine form finished in 1:36:50. Shortly behind him was Nicola Crowe in 1:37:07 with Allison Brown crossing the line in 1:42:45.Next up were Pete Ritchie came home a whisker under the 1:45 marker in a time of 1:44:55. Beth Lardner finishing in a time of 1:52:55 and Kenneth Stewart in 2:08:30. Rhona McBean and Alan Paterson finished the Alloa course in a respectable time of 2:20:42 and 2:22:34 respectively. Fiona Morrison was on top form at Alloa finishing with a time of 2:31:57, her quickest time since the Aviemore Half Marathon in 2011.

For further information about training with and joining Perth Road Runners visit: www.perthroadrunners.co.uk.