There was a good turnout from Perth Road Runners chasing points in the Club’s “Hills are Alive” hill running series, with the Falkland Hill Race being the 4th out of 5 races in the club competition.  The Hill Race was run in hot, sunny conditions on mid-summer’s day and coincided with the village street fair.  The race had a great atmosphere thanks to a crowded main street and the contingent of Perth Road Runners enjoyed a competitive race.  First Perth Runner across the line was Mike Dales in a time of 28.10 and 15th place.  Next up was Colin Wilson who was 17th in 28.28 and Joan Wilson in 20th place overall and first lady with a time of 29.26. Second lady and 22nd place overall went to Denise Burns in 30.36, closely followed by John Rudd in 23rd place and 30.40. Fiona Manson clocked 32.04 to come home in 26th position.  The final race in the Hills are Alive series is the Newtyle Hill Race on July 30th.

Also venturing to Fife for midsummer sunshine, Duncan Ryan contested the Glenrothes Road Running Festival 10k race.  Duncan picked up the prize for 2nd male vet in a time of 37:36 and achieved 7th overall in a field of nearly 350 runners.

Back on home turf, Perth Road Runners continue to support the Perth Parkrun both as volunteers and runners.  The 31st Parkrun saw Rhona McBean performing Race Director duties and a number of PRRs achieving PBs for the course.  Duncan Ryan was first man home for Perth and 3rd overall at 18:03 while Jimmy Fotheringham achieved 4th overall and a new PB of 18:19.  PBs were also picked up by Brian Cooper at 18:46, Kenneth Stewart 22:18 and Beth Gripton 23:47.

Runners are reminded that the 5th race in the Club Championship series is the Stonehaven Half Marathon on Sunday 6th July at 11.15am.  This is followed on Sunday 13th by the Crieff 10k.  For those contesting the Summer Series the next race is Newburgh on 9th July. Further information on Perth Road Runners can be found online at www.perthroadrunners.co.uk. 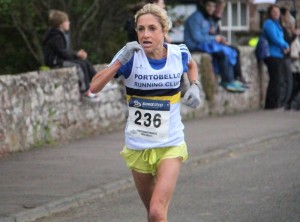 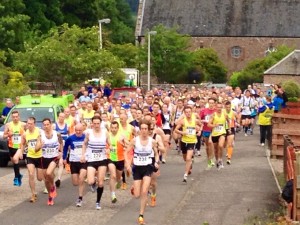 Perth Road Runners Brig Bash 5 had an international dimension on Wednesday 2 July when Nicola Duncan of Galway, now competing for Portobello Running Club, contested the race. Nicola, who broke the (female) Brig Bash course record at 27:32, has been selected to run the marathon for Ireland in the European Athletics Championships in Zurich in August.  Nicola demonstrated her international pedigree, leading the women’s race from the start and achieving first female to 1-mile marker in an impressive 05:32. Nicola achieved a top ten place of 7th overall in the race.

The race attracted over 200 runners from 22 athletics clubs and a number of independents from across central Scotland.  The rain held off and the flat course proved to be quite fast.

The front of the field was closely contested with the top three fast men all competing for Edinburgh AC.  The race was won by Neil Renault who led strongly from the start to finish in a superb time of in 24:38. The runner up was Bryan Mackie in 25:31, with clubmate Richard Meade securing 3rd place at 26:44.  Arbroath Footers RC’s Ruaridh Campbell at 26:48 and Strathearn Harriers’ Wattie Mackay at 28:39 scooped first Vet and first Super Vet respectively. The prize for first Master Vet went to Alan Lawson of Dundee Hawkhill Harriers in a time of 34:07 and first Vintage Vet prize was secured by PRR’s own Bob Brown in a time of 37:08.  The Men’s team prize went to Edinburgh Athletic.

The women’s race was strongly competitive with Nicola Duncan setting the pace at the front.   The runner up was Jennifer Emsley of Central AC achieving 20th position overall with a sub 30 minutes time of 29:22.  The 3rd lady was Charlotte Fortune of Linlithgow AC in a time of 30:26.  The veterans’ women’s prizes for first Vet and first Super Vet respectively were earned by Suzanne Gray of Pitreavie AAC in a time of 31:40 and Gail Murdoch of Carnegie Harriers in a time of 33:16.  Judith Dobson of Kinross Road Runners won the first Master Vet prize for her time of 35:41 and Sheila Bauchop of Ferranti AAC achieved first Vintage Vet in a time of 45:20. The Carnegie Harriers trio of Gail Murdoch, Fabienne Thompson and Melanie Sinclair had a good race scooping the Women’s team prize.

The bar was raised even higher this year for the renowned Brig Bash 5 post-race baking, with the introduction of a bake off competition.  Very hotly contested, the prize went to Alan Paterson for his ginger cup cakes.

PRRs would like to thank Norman Watson of Perth Strathtay Harriers who kindly presented the prizes.  Also thanks to the race sponsors Sweatshop, Highland Spring and Tunnocks.  The much needed post race massage, courtesy of Caledonian Physiotherapy Services, was welcomed by all. Last but not least, the Club would like to thank the members and their families who supported the race to make it a success.  If you are interested in joining Perth Road Runners, please visit the website at perthroadrunners.co.uk.  We are also on Facebook.

Heat and hills were the order of the day at the annual Stonehaven Half Marathon on 6 July where 15 Perth Road Runners contested the fifth race of the Club Championship series.  The race was one of two halves with the first mainly going up, and the second mainly down.  The start, on a path beside the playing fields, bathed in bright sunshine, made a sharp 150 degrees hairpin bend upwards into the town.  “Going up” was the theme for the first few miles through the town and heading out into the attractive countryside around Stonehaven. Some good times were recorded despite the heat and undulations.

The icing on the cake was the performance of the next generation, Gregor Ryan, won the 1k race while waiting for his Dad to complete the half marathon!

Veronica and Neil Muir took a dip in the outdoor pool as a well earned cool down after the race. 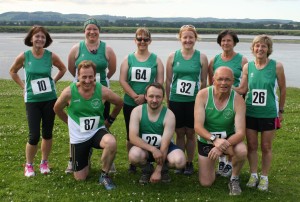 Perth Road Runners are at the top of their game in July with twice weekly races during the summer months.

The Newburgh 4.23 miles midweek multi terrain race was the second in the Club’s Summer Series.  The course proved to be testing, run alongside the Tay on rural paths and rutted fields, the race was not one for the faint hearted.

In a field of over 100 runners, Grant Wooler was first man over the line for Perth in an impressive 30:17. Grant Strachan, returning to racing, was Perth’s runner up at 32:01. Melanie MacRae at 33:56 made up Perth’s top three and first Perth lady. Peter Ritchie was in good form at 36:13 while Fiona Hair, slipping in under 40 minutes at 39:52, ran competitively picking up honours for first female vet over 65.  Just over half a minute later, Susan Smith at 40:31 led the remaining Perth ladies trio home, Rhona McBean 45:53, Fiona Morrison 53:10 and Jean McCullough at 55:10.

4 days later, on a hot 13 July, 20 PRRs headed to Crieff for the 6th race in the Club Championship series, the Crieff 10k organized by Strathearn Harriers.   This multi terrain race is run over a scenic route with 220m ascent, starting from Morrison’s Academy sports ground.  The course goes out over Laggan Hill, past the Baird Monument and back along the banks of the River Earn via Lady Mary’s Walk.

In a field of over 300 runners, Stuart Robertson was first Perth man home in 40:41 achieving a top 20 place. Less than 30 seconds later, James Fotheringham was runner up for the PRRs in 41:08, slicing a full minute off last year’s time. The Perth men’s top three was completed by Neil Muir in a competitive 43:31.  Another strong performance saw Mark Leach cross the line in 44:42.  Simon Grieshaber and Hugh Daley ran well achieving sub 50 minute times of 47:24 and 49:58 respectively with Steven Gilbert under 10 seconds later at 50:07.  Kenneth Stewart and Melanie MacRae were seconds apart as they sprinted for the line at 50:45 and 50:48 respectively, Mel achieving Perth’s first lady honours.  Bob Brown and Sue Jones were neck and neck crossing the line at 52.24 and 52:28 respectively. David Woods, returning to racing after period of injury, was pleased to finish in 53:16.  Over the next 3 minutes, 3 PRRs completed the tough hilly course, Beth Gripton 54:39, Peter Ritchie 56:49 and Debbie Jackson 57:33.  Susan Smith and Fiona Hair ran strongly to cross the line at 60:33 and 61:23.  Alan Paterson finished at 65:57 leading home Jean McCullough 79:16 and Fiona Morrison 79:41.

PRRs are reminded that the final race in the closely contested Hills Are Alive Series is Newtyle Hill Race on 30 July.  The next race in the Summer Series is the free Perth Parkrun on 7 August.  Another free event for PRR members is the Club Duathlon on 14 August.  The start is 18.45 at Pitcairngreen.