January the 1st saw the Ne’er day nonsense challenge take place in pouring rain and muddy conditions.This meant the green vests predicting how long it would take to complete 3 races which included the Perth Parkrun at 9.30,the Camperdown Parkrun at 11.00am both of which were 5k and the Blairgowrie fun run at 1pm which was approximately 6k. Nine hardy souls took part in this new event. Alyson Macpherson predicted 1hr 24mins and ran well to be only 3min 43 secs out.Next was Peter Ritchie predicting 1hr 20mins and was 3min 38secs out.Only disappointment for Peter was that there were only 3 races. Sally Newtons 1hr 37 min prediction was only 2min 54 secs out.Grant Strachan beginning to return to form was next best being 1min55 mins out after predicting 1hr 13mins. Neil Muir ran his usual impressive races managing to get within 1min 26mins of his stated 1hr 7 min target.Brian Coopers target was 1hr 9mins and got within 1min25 secs of this including pushing his wee one round in a buggy at Blairgowrie!! Jimmy Fotheringham returning from injury was 1min 21 secs out from his 1hr 10 min target. Sue Jones was second with only a 47 second difference from her 1hr 30 min prediction using a very strange formula that probably only Stephen Hawking would understand.However pride of place must surely go to Barry(The Highwayman) Campbell who was only 13 seconds out after a 1hr 21 minute prediction. This won him a £30 voucher from Campus Sports.Thanks to Fiona,Ian and Veronica for braving the cold conditions to photograph and time the event.

Saturday the 3rd took us back to the usual Saturday for Perth parkruns and 8 Perth Runners took part out of a field of 147 on a bright frosty morning. Brian Cooper finished 7th in 19.57 followed by Jimmy Fotheringham in 10th running 20.33. Kenny Stewart produced his trademark finish to cross the line in 23.24. Debbie Jackson cruised home on 25.49 followed by Linda ONeill managing a respectable 28.21. Linton Scarborough showed his parenting duties helping his Daughter home in 33.24. Richard Ward was next home running a decent 35 mins, with Karen Walters following him closely home in 35.24.

Saturday the 10th saw 103 hardy souls take part in a very windy,cold and muddy Perth Parkrun .
Seven Perth Road Runners were included in this field.Linton Scarborough ran a cracking race coming back to fine form after a series of injuries finishing 2nd in a time of 18.45.Stuart Robertson was only 13 seconds behind him in 3rd place running 18.58.Terry Hislop, getting acclimatised to the Perth weather after 9 years in Dubai went well to run 20.20. Jimmy Fotheringham was next home on 20.46 after just pipping Grant Wooler on 20.55.Andy Lockhead was next on 22.10 followed by Alan Paterson completing the green vests on 30.04.

Also congratulations must go to Simon Grieshaber by finishing 29th in the Fife AC cross country championships running a fine 35.31.

The 3rd Frostbite Trail Race took place at the weekend as well and 10 Perth Road Runners took part. 1st home and 28th overall was Neil Muir running it well in 26 mins. Paul Grace closely followed him in a time of 26.53. Barry Campbell was next on 27.16. Stewart Dallas cruised home in 28.16. Daile Sipple stormed him in a time of 35.28.closely followed by Alan Paterson on 36.52. Caroline Hogarth managed a very respectable 37.20 and Eleanor Paul not far behind on 38.04. Robin Wombill cruised home in 42.22 with Fiona Morrison going well to post 47.36.

Runners are reminded that the 2nd Lark In The Dark takes place on Tuesday the 20th at 5 mile wood in Stanley. It starts at 6.30pm and competitors are reminded that a torch is required but no watches can be worn. The route will be between anything from 3 to 5 miles in distance.

Saturday the 17th saw the Eastern District Broxburn cross country championships take place on a bitterly cold day. This being recognised as the toughest course in the series. Including Lungbuster hill and icy water that went knee high. The ladies did 2 laps of 2.7kms. Claire Douglas ran superbly well to run 26.28. Next home was Allison Brown coming back to form on 30.55 followed by Debbie Jackson running a fine 31.26. Daile Sipple continued her improvement completing the quartet running 34.07.

The men had to run 3 laps with The awesome David Knight completing the course in 33 mins.Hamish Shankland ran extremely well to post 39.20 followed by a cracking run by Paul Grace on 39.45. Simon Grieshaber showing his experience to finish just behind on 39.56. David Wood continued his recovery from long term injury to produce a respectable 46.07.

Saturday also saw the 61st parkrun take place. A fantastic 17 Road Runners took part out of a field of 149.Greg Simpson sped round to finish second running a cracking 17.09 Newcomer Martin Mcewen ran well to finish 4th on 19.09. Jimmy Fotheringham was next home to post a 19.45 which was his first sub 20 minute time for a few months. Stuart Fraser pulled out the stops to run 19.49 and a new personal best.Grant Wooler was next on a very respectable 20.14. Julie Ramsay was delighted to post a new personal best running 20.34. Richard Ward managed 22.36 and 28th place. The next 4 runners were all within a minute of each other. Grant Strachan on 24.14,Caroline Jones 24.18,Kenneth Stewart 24.19 and Marianne McKay 24.49.Sally Newton sped home to manage 28.55 with Caroline Hogarth not far behind running 29.52.Eleanor Paul 38.18,Dorothy Bates 38.22,Fiona Morrison 38.23 and Karen Walters 39.39 completed another great turnout for the Green vests.

Runners are reminded that annual subscriptions are now due for the 2015 season. The presentation dinner at the Lovat Hotel is on the 7th of February at 7.30pm. 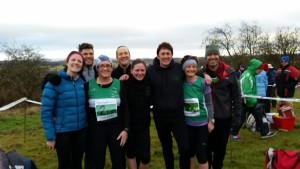 Saturday the 24th saw 13 hardy Perth Road Runners take part out of a fantastic field of 181 for the 62nd Parkrun. 1st home and 2nd overall was Martin McEwen running a brilliant 18.35. Next was Jimmy Fotheringham in 21.52 followed by Caroline Ness posting a magnificent time of 23.02 which was only 11 seconds off her personal best. Evergreen Kenny Stewart managed 23.03 with Julie Ramsay following him home on 23.37 . This, after running 12 early morning miles with a head torch in the dark before taking part. Hugh Daly taking part in his first Parkrun ran a respectable 26.08 after a series of injuries. Fiona Hair ran well again to finish 28.13. Linton Scarborough went back to his pacing game running 29.11 in doing so managing to get Jenny Aldheim home in 29.10. Sally Newton cruised around the 5k track in 29.27. Karen Walters on 32.20, Richard Ward 33.02, Fiona Morrison 34.47 and Stuart Fraser on 35.00 completed the final quartet home.
Saturday also saw the Buchlyvie 10k take place which saw Marianne McLevy run a very respectable 51.17.
Anybody interested in joining the Perth Road Runners are welcome to come along at 6.30pm on Tuesday evenings from Bells Sports Centre where the club run takes place. Runners of all different capabilities are welcome.
Thursday evening at 6.30pm will see hill reps at Hatton Road, Kinnoull take place.
The club has also arranged an exclusive Tiso night on Weds the 11th of February from 6pm until 8pm.A 20% discount will be available on the evening with the opportunity to sign up for a free outdoor experience card.
This is for club members only and membership cards must be shown on the evening. Annual subscriptions of £15 are now due. 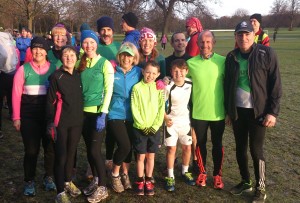 PRR’s at the Park Run