Perth Parkrun on Saturday 5th was cancelled for the first time since it began due to the heavy flooding at the North Inch Park caused by Storm Desmond. Tuesday is the usual club run from Bells Sports Centre at 6:25pm. New members are always welcome. Thursday 17th will be a track session at George Duncan Athletics track with coach Colin Keogh putting the runners through their paces. 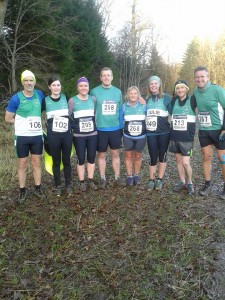 It was a busy week for the Perth road runners at various events in Scotland and beyond.

Kevin Rogers was declared fastest Santa in Perth, first to cross the line at the North Inch park. Over 10 road runners took part amongst hundreds of other Santa’s.

11 green vests also took part in the weekly Parkrun event, which followed an alternative route due to the floodgates still be closed. The club welcomes new runners every Tuesday 6:25 at Bells Sports Centre. There will be no Thursday sessions on the 24th or 31st during the holidays.

December 15th was the annual Road Runners Yahoo event, a challenging 9.5 mile race round the streets of Perth. The staggered start times meant that all club runners had the chance of winning. Caroline Hogarth was first to cross the line ahead of 38 other runners. Myles Bax ran the quickest overall time, finishing in 57:27, just seconds faster than Greg Simpson (57:35) and Michael McConnell (57:46).

On Sunday 20th there was the annual pre-Christmas social run at the Sma’ Glen near Crieff (see picture) giving the runners a chance to battle the elements, four seasons in one day, and the festive bulge.

The club was well represented at Perth Parkrun on Saturday, with 3 club members in the top 5 places. Michael McConnell secured his 8th parkrun victory in a time of 17:49. Kevin Riddell was third in 19:10, with Jimmy Fotheringham fourth in 19:21. Special mention to Mike Dales (24:45) who completed a highly impressive achievement of either walking, running, cycling, kayaking or skiing at least 5 kilometres per day for 1000 consecutive days!

Tuesday night club runs will continue during the holiday period from Bells sports centre at 6:30. There will be no Thursday night session on Hogmanay. If you fancy starting the New Year with a Parkrun double, Camperdown will be starting at 9:30am on January 1st, followed by Perth at 11am. If not, the New Year is still a perfect time to join the club and target some Spring races.