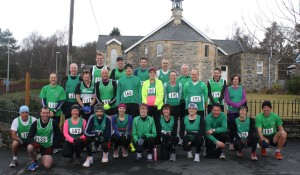 Snowy roads did not cool the enthusiasm of PRRs heading to Newtonmore 10 mile Road Race, the second of the Club’s Championship races. Spirits were further warmed by the organisers Highland hospitality rewarding all finishers with a choice of a Wild Cat beer or a Stag’s Breath liqueur. In a field of over 140 competitors the PRRs made up nearly 20%.

Stuart Robertson was first Perth man home with a 61:27 giving him 11th overall. Michael Wilson was runner up for the PRRs with a competitive 63:33. The Perth men’s top three was completed by James Fotheringham in an excellent 65.21. Over the next 2 minutes another five green vests crossed the line with strong performances from Neil Muir in 66:17, Mark Leach 66:28, Stephen Ferguson 66:45, Grant Wooler 68:20 and Colin McCreath 68:32.

The first Perth lady home was Julie Ramsay with a sub 70 time of 69:31. Nicola Crowe, second PRRs lady, put down another fine time of 72:12. Paul Grace was the next green vest over the line in 73:48. Less than 10 seconds separated Peter Ritchie, and first male veteran over 70 Bob Brown, finishing at 74:27 and 74:37 respectively. Hugh Daly’s marathon training paid off with a strong performance of 75:36. Less than a minute separated Kenneth Stewart and Simon Grieshaber with solid results of 78:48 and 79:20 respectively.

Slipping into the top 100 Allison Brown put in a competitive time of 81:06. Steven Gilbert and Beth Gripton crossed the line a second apart at 83:13 and 83:14 with Sue Jones on their heels at 84:20. Fiona Hair scooped the first female veteran over 60 honours for Perth at 86:50 followed by Susan Smith well within her sub 90 target at 87:23. Alan Paterson and Sally Newton battled it out in the headwind of the return leg finishing 97:41 and 98.26 respectively. In her inaugural 10 miler, Kirsty Johnston was home in a respectable 107.04 while Jean McCullough scored a PB for the distance at 107:05. Fiona Morrison completed PRRs contention at 112:51.