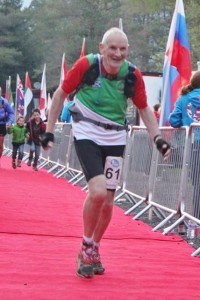 Back in actionafter the Easter Break PRRs contested hills, 10ks and the Highland Fling Ultra Marathon.

Four PRRs ventured to Fife for the Normans Law Hill Race, the second in the Club’s Hills are Alive series. With runners free to choose their own route to the top,Mike Dales was first Perth man home in 42:01 with David Norrie runner up for Perth at 43.21. Fiona Manson flew at 43.58 and Melanie MacRae put in a fantastic 50:08 for the 8k with spectacular views of the Tay.

A pleasant evening attracted ten PRRs to contest Kinross 10k.  Greg Simpson was first home for Perth and second overall in a spectacular 35:15.  Less than 30 seconds separated Stuart Robertson and David Hunter at 38:16 and 38:34 respectively, completing the Perth top 3.  Terry Hislop achieved first over 50 at 38:50.  Jimmy Fotheringham’s sub 40 time of 39:30 was closely followed by Neil Muir at 40:20.  Julie Ramsay achieved third lady at 41:41 while Vicky Park pulled off a PB at 47:31.  Steven Gilbert’s first 10k saw him accomplish a sub 50 48:44 while Beth Gripton fresh from the Paris marathon completed the honours for Perth in 51:38. Simon Grieshaber clocked 43:39 at the Balfron 10K.

Huge congratulations go to Alyson MacPherson and Robin Wombill who recently completed the full Highland Fling 53 mile ultra marathon. The race started at Milngavie and finished at Tyndrum following the bottom half of the West Highland Way with over 9,500 feet of climb. There were checkpoints to go through and one of these was timed and had to be reached in time to avoid disqualification. Whilst this appears harsh it is to ensure runner safety, the race takes place in the Scottish mountains, if somebody is too slow to get a certain distance in time then they will probably be too tired to be able to finish the race safely. The timed checkpoint for the race was at the top of Loch Lomond at 41 miles and had to be reached in 11h 30m. Despite a poor forecast the weather conditions were perfect, not too hot or windy, the occasional nice cooling shower and the sun even appeared late in the race. The race started at 6am and Alyson put in a good solid performance being totally untroubled by time limits and finished in 12h 44m 15s. Robin was pleased to get through all the checkpoints in his own predicted times and reached the timed checkpoint safely in 10h 36m 42s, with 12 miles and another 2,500 feet of climb still to do he finished at Tyndrum in 14h 29m 45s.

The Cape Wrath Challenge is a small but popular running event that takes place each year in May at Durness in Sutherland. The event that lasts for a week nearly doubles the population of the area and consists of races every day from Monday until Thursday, a rest day on Friday and then a marathon on Saturday. Perth Road Runners Linda O’Neill and John Rudd set off from Perth immediately after John had completed the Highland Etape 81 mile cycle race! On the Monday John completed the half marathon race in 01:50:25 while Linda completed the10k race in 55:47. On Thursday they both ran in the 3.5 mile charity fancy dress beach race, which saw villagers and local school children joining in the event. After Friday’s rest day Saturday dawned for the Big One – the Cape Wrath Marathon. The race is different in that competitors are taken to the start on Cape Wrath in a small ferry across the Kyle of Durness, they are timed for the first 22 miles across the Cape to the lighthouse and back, their times noted and then they’re ferried back to the mainland to complete the last 4.2 miles up to the finish at the village hall. It’s a very challenging race with 2,500 foot of climb and the road across the Cape is very rough and exposed to the elements. John and Linda were joined in the marathon by Robin Wombill. John completed the event in 3:55:04 and Robin in 4:48:15 but the star was Linda who trained hard for months and was rewarded with a finish time of 4:41:56.

On Sunday the 18th of May, Kenneth Stewart and Peter Ritchie ventured to the Lake District to contest the Windermere Marathon. The marathon starts and finishes in the grounds of Brathay Hall, at the Northern end of Windermere. The course takes runners through some of the Lake District’s most stunning scenery. Unlike any city marathon, it was up and down hills the whole way round the lake with 20C+ temperatures. Kenneth wore his kilt to make the challenge that wee bit harder. With many marathons under their belts, Peter and Kenneth finished in 04:16:11 and 04:39:26 respectively demonstrating their tenacity with sprint finishes in a field where several runners limped off the course. 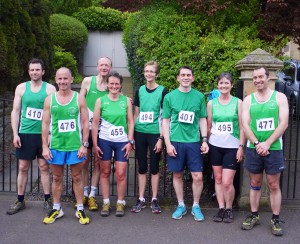 Perth Road Runners turned out on a sunny evening in mid May to support the Perth Strathtay Harriers annual Kinnoull Hill race, the second hill race in the Club’s Hills are Alive series. Duncan Ryan set the pace for Perth’s green vests crossing the finish line in a time of 27:27. Michael Wilson was the PRRs runner up in 30:17 with Jimmy Fotheringham hot on his heels at 30:28.  Less than 25 seconds separated the next Perth trio with Mike Dales at 35:30, Paul Grace at 35:37 and Grant Strachan at 35:53.  Joan Wilson was the first green vested Perth lady at 36:35 with Fiona Manson at 38.20 and Sue Jones at 40.27 completing the honours for Perth Road Runners.

Runners are reminded that entries are now open online at Entry Central for the Brig Bash 5.  The course is a fast, flat, rural 5 mile road race in Bridge of Earn with great potential for PBs. The race is taking place on Wednesday 2nd July with registration from 6.30pm at the Bridge of Earn Institute for a 7.30 pm start. Sorry, no entries on the day. As well as the usual individual and team prizes, we are also repeating the very popular ‘Olympic Mile’ – 1st male & female to the reach the “1 mile marker” to receive an engraved glass (subject to completing the 5 mile course).  As well as sponsorship from Tunnocks, Highland Spring and Sweatshop, free post race massage will be offered to runners courtesy of Caledonian Physiotherapy Services. The renowned Perth Road Runners post race spread with home baking and free tea and coffee will be on offer to help refuel the runners after their exertions.  Further information on The Brig Bash 5 is available on PRRs website www.perthroadrunners.co.uk.

If you are interested in becoming a member of Perth Road Runners please visit us at www.perthroadrunners.co.uk. We are also on Facebook.