Over 750 runners took part in The City of Discovery’s full and half marathon races on a hot and humid 20 July.   The Dundee Running Adventure Marathon (DRAM) race starts at Camperdown Park passing through woodland paths, parkland and along the northern banks of the River Tay on trail and roads, climbing from sea level at 22 miles to take runners up to Camperdown Park to the finish line.

The marathon route leads runners around Dundee’s best sights taking in Broughty Ferry castle, the docks, HMS Unicorn, RRS Discovery, Tay Bridges and the riverside. Despite the heat and humidity Mark Leach ran well to finish in the top 20 in a competitive time of 3:37:07. Peter Ritchie completed in 04:22:54 and Kenneth Stewart completed a remarkable 97th marathon towards his target 100 in 5:08:06.

A week later three PRRs joined 190 runners at Ballater 10 mile road race. Again the conditions were hot and humid. The course takes in a picturesque route over 7 bridges, with some off road sections, through the superb Royal Deeside scenery. Stuart Robertson was Perth’s first man home in 63:05, just outside the top ten overall. Jimmy Fotheringham, at 65:43 shaved over 2 minutes off last year’s time while Kenneth Stewart’s 76:55 was nearly 2 minutes faster than his Newtonmore time earlier this year.

Runners are reminded that the next race in the Summer Series is the Perth Parkrun on Saturday 2nd August at the North Inch for a 9.30 start. Photo at 09.15.

Personal bests (PBs) were the recurring theme when Perth Road Runners competed in the 4th race in the hotly contested Summer Series on Saturday 2nd August at the Perth parkrun. In a field of over 165 runners, James Fotheringham led the club home in 18:51 giving him 4th overall. One minute later, Perth’s runner up was Grant Wooler in 19:51. Angela Irving was first lady over the line storming home in 19:58 at her first Perth parkrun. Peter Ritchie earned a new PB crossing the line in 21:59 in a photo finish with Richard Ward in 22:00. Only 2 seconds separated the Perth trio of Fiona Angus at 22:12 in her first parkrun, Amy Greig at 22:13 scoring a new PB while Brian Cooper did a magnificent run with pushchair at 22.14. Mel Macrae ran competitively at 22:35 to maintain her challenge for the Summer Series. Vicky Park and Kenneth Stewart sprinted for the line in 23:03 and 23:05 respectively in Vicky’s first Perth parkrun. The training miles paid off for the next three green vests across the line, all in top form achieving new PBs; Susan Smith at 25:31 and Fiona Hair at 25:50 challenging the women’s summer series top 3 while Alan Paterson at 26.00 minutes knocked 2.5 minutes off his previous PB. Karen Walters at 27:59 ran well clocked just outside her PB for the course while Sally Newton crossed the line in 28;48. Rhona McBean joined the PB club with a strong finish in 30:03 while Jean McCullough 31:34, Kirsty Johnston 32:34 and Fiona Morrison 34:07 completed the strong turnout for Perth. 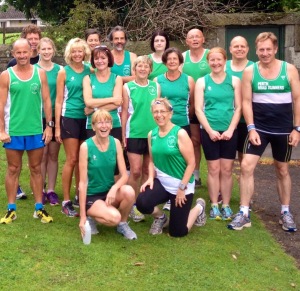 With temperatures rising, the heat was on for the PRRs contesting the penultimate race in the Club’s Summer Series. 5th August saw PRRs travel to Knockhill Racing Circuit north of Dunfermline for the Carnegie Harriers Memorial Race. The unique race was three 1.3 mile laps of Knockhill Racing Circuit – a total race distance of 3.9 miles on an undulating course.

Stewart Robertson led the Club home in 22.10, securing 12th overall and 3rd male vet over 40 in a field of over 150 runners. James Fotheringham was runner up for Perth in 23:30 while the men’s top 3 was completed by Grant Wooler in 24:44. Claire Douglas was Perth’s first lady in 25:04 and third female vet over 40.   Peter Ritchie and Melanie MacRae were closely matched crossing the line in 28:00 and 28:47 respectively. Fiona Hair and Susan Smith continued their challenge for the women’s top 3 in the Series finishing 32:11 and 33:10 respectively. Alan Paterson continued his recent run of excellent form crossing the line in 34:54. Three green vested ladies completed the ladies challenge with Rhona McBean in 37:25, Jean McCullough in 39:04 and Fiona Morrison 44:58.

The next day 3 PRRs returned to Fife for the Tour of Fife race series consisting of 5 tough races on 5 consecutive days. Competitor’s times and finishing positions are recorded at each race and added together on the final day to determine their overall series time and category winners. Over 130 runners completed the series. PRRs Grant Strachan finished in a competitive 51st overall in a time of 2:19:26. Bob Brown at 2:29:56 was first male over 70 and Peter Ritchie finished in the top 80 at 2:31:56.   The aptly named Uphell Time Trial ascent of East Lomond proved to be the highlight on the Friday night stage when Andrew Lemoncello, Scottish 10,000m runner from the Glasgow 2014 Commonwealth Games broke his own course record in a time of 09:29. Grant Strachan put in a respectable time of 14:20 while Bob Brown at 15:38 broke the age over 70 Time Trial Record and Peter Ritchie at 16:14 knocked 40 seconds off his 2013 time.

Closer to home, the icing on the cake saw Perth Road Runners Mike Carroll winning the 2014 Perth Kilt Run in a superb time of 16:05. 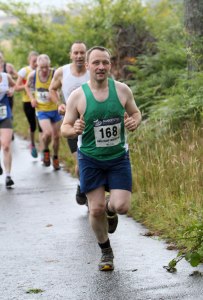 Perth Road Runners ultra runner Robin Wombill won through to conquer the 43 mile Devil o’ the Highlands race on 2nd August after his recent disappointment on the West Highland Way.  After a fall 35 miles in to the 95 mile West Highland Way race 6 weeks ago Robin had to retire from the race after 75 miles with back and leg injuries. Until the last minute it was doubtful if he’d be able to compete in the Devil of the Highlands race from Tyndrum to Fort William following the top half of the West Highland Way. Although not fully recovered and with a marked loss of endurance he got to the start line with the sole aim of crossing the finish line. Despite the weather forecast for heavy rain fortune smiled on the race and Robin only needed his waterproof jacket for the last 3 miles of the race. Robin had brilliant checkpoint and running support from two of Scotland’s finest International ultra runners Fiona Rennie and Pauline Walker in addition to his usual crew of Iain and Fiona Morrison and, although slower than his usual pace, he successfully completed the extremely tough race which has a total climb of over 6,000ft.

Snorkel and flippers would have been a better bet than trainers and garmins for the Perth Road Runners contesting the 7th race of the Club Championship, the Isle of Mull Half Marathon. The rain poured non-stop from the ferry leaving Oban with 17 PRRs aboard travelling to Mull for the 26th anniversary of the Half Marathon, 10k and Junior Races on Sunday 10 August. As the remains of Hurricane Bertha swept across the west coast, this popular racing festival was beset by gremlins from the start. As runners waited in lashing rain, the race got underway 30 minutes late. To add insult to injury an off island bus driver failed to transport a further 30 Half Marathon runners, including 4 PRRs, to the correct start position, on time. On the plus side, the absence of heat and headwinds helped the PRRs to put in some good performances, scooping up prizes and PBs.

In a field of nearly 150 runners Stuart Robertson was first Perth man home in a fantastic PB time of 01:19.13, securing 7th place overall. Duncan Ryan was runner up for the PRRs notching up another PB with a superb 01:23:00.   The Perth men’s top three was completed by Jimmy Fotheringham in an excellent 01:25:08, just outside his PB for the distance. Neil Muir put in his best half marathon time this year at 01:25:57. Colin McCreath and Julie Ramsay stormed home finishing together at 01:31:28, earning Julie the 1st Female Vet trophy and PRR’s first lady to cross the line.

The next two green vests were less than a minute apart with Paul Grace achieving a PB at 01:36:32 and Simon Grieshaber showing a return to form at 01:37:14.  Kenneth Stewart, likening the race to standing under a cold shower for an hour and a half, achieved his best half marathon time for 3 years at 01:41:22. Hugh Daly at 01:43:48 put in a strong performance despite his frustrating start to the day on the gremlin bus. Nicola Crowe was the next green vest and Perth’s 2nd lady over the line in an impressive 01:44:36. Less than 30 seconds separated David Wood and Alyson Macpherson finishing in times of 01:47:32 and  01:47:57 respectively.  Jean McCullough completed her first half marathon in a while in 02:36:08 returning to racing from injury earlier in the season.

The icing on the cake was the Perth women’s team of Julie, Nicola and Alyson winning the overall female team prize while the men’s team of Stuart, Duncan and Jimmy brought home the trophy for the first men’s team.

In the 10k race David Hunter, returning to form at 36:14, scooped up the trophy for 3rd overall in the field of 100 racers. Stuart Dallas also secured a top ten place in the 10k putting in a superb 42:46. Daile Sipple completed the honours for Perth achieving a PB time of 56:24. Rising junior star Gregor Ryan won the junior under-14 5k race. 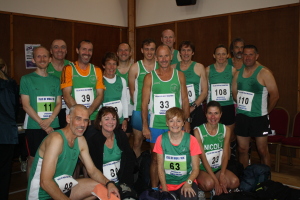 In a busy programme of summer racing, PRRs have been competing in a range of athletics disciplines, winning prizes from various points of the compass.

The fifth and final race in the closely contested Hills Are Alive Series saw Mike Dales and Fiona Manson take on the Newtyle Hill Race near Birnam.  The race proved to be the Series clincher with Mike’s time of 42:58 and Fiona’s time of 46:26 securing them first male and first female honours for the Hills Series.

Twenty-nine athletes took part in the annual Club Duathlon on 14 August. The course is a 4.2 mile run, followed by a double 6.2 mile cycle around Redgorton, past Battleby and through the Dryarch, circling back to Pitcairngreen. With some excellent performances on the night, the Team Prize went to Sonjia Crow and Colin Campbell, Claire Douglas secured the female prize and the male prize going to Colin McCreath. The Club sends thanks to Kirsty Johnston and Alan Paterson for organising the Duathlon and to all the other volunteers who helped to make the event a success on the night.

Back on the Inner Hebrides, Melanie MacRae was rewarded for her season of racing when she picked up the First Female trophy at the Isle of Coll 10k on 16 August, storming across the line in 46:41.

Nearer home, the Sherriffmuir 11 mile road race attracted Club fast man Duncan Ryan fresh from a PB at the Isle of Mull HM. The out and back course on the north western edges of the Ochil Hills goes mostly downhill for the first half and mostly uphill for the second half, finishing at the Sherriffmuir Inn. The head wind on the return leg proved a tough challenge but Duncan’s impressive time of 01:12:13 secured him 6th place overall and the prize for 1st male veteran.

On the same day, James Fotheringham and Bob Brown headed eastwards to contest the fast, flat Forfar 10K. In a field of nearly 300 runners, James Fotheringham completed an excellent sub 40 time of 39:18, earning him 12th place overall. Bob Brown was first male vet over 70 in an impressive time of 47:03. 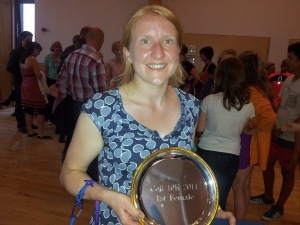