Perth Road Runners have been have been getting into their stride in recent weeks with results from various points of the compass.

On 23 March, three PRRs made the journey to the Trossachs for the Loch Katrine Running Festival. The event was organised by Scotland ‘Ice Queen’ Audrey McIntosh, who last November became the first Scot to complete the double event of the Antarctic Ice Marathon and Antarctic 100k Ultra Marathon.

The weather was brilliant and the scenery with its snow covered mountains was stunning. There was a chilly wind on the tough hilly route but plentiful trees around the lochside ensured that this wasn’t a serious problem. All the races started at the Sir Walter Scott jetty, heading anti-clockwise along the side of the loch, each one turning at a different point and then returning to the start. Linda O’Neill completed the half marathon in 2:13:43 to come home third in her age group. John Rudd crossed the line in an impressive 3:57:23 while Robin Wombill completed the marathon in the role of the ‘sweeper’, running at the back with the last runner to ensure that everybody was safe, nobody dropped out and got left behind, he was out there for nearly 6 hours. The event raised over £4,000 for Alzheimers Scotland.

Continuing his preparations for the Rotterdam Marathon in April, on the other side of the country, Peter Ritchie having completed the 10 miler at Newtonmore the day before, ran the Garioch Half Marathon (Inverurie), in a solid 1:48:21.

The inaugural Tay Ten road race with 165 runners will take place on Sunday 6 April 2014 at 11am at the Perth George Duncan Track. Come along and see our very own Perth Panda running the Tay Ten! 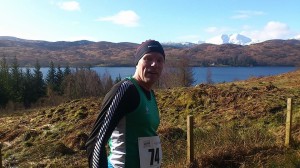