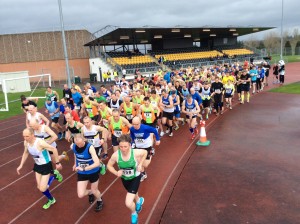 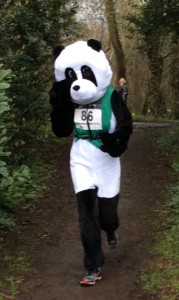 Perth Road Runners were at the heart of Scottish running on Sunday 6th April with the launch of the inaugural Tay Ten, the brand new 10 mile road race with a stadium start and finish at the George Duncan Track in Perth.  The race attracted over 170 runners from 24 clubs across Scotland.  After early morning sunshine, the rain held off and the flat course proved to be quite fast, despite muddy patches in places and headwinds in the final miles.

The front of the field was closely contested with the top three fast men finishing in sub 60 minute times.  The race was won by Perth’s Greg Simpson who led strongly from the start to finish in a superb time of 57:56. The runner up was Graeme McCabe, Kirkintilloch Olympian at 58.38 with 3rd place Johnny Lawson of Portobello Running Club hot on his heels at 58.46.  Deeside Runners’ Colin Dempster at 01:00:33 and Strathearn Harriers’ Wattie Mackay at 01:01:16 scooped first vet and first super vet respectively, placing 4th and 5th overall in the race.

The top three ladies saw Forfar Road Runners well represented with Lynn Henderson as first lady over the line at 01:06:01.  The runner up was Claire Thompson of Victoria Park Glasgow at 01:07:20, with Forfar’s Tracey Morgan less than a minute later at 1:08:08.

Perth’s second man home, at 17th overall, was James Fotheringham in a strong 1.05.50.  Claire Douglas picked up more honours for the host Club placing 5th lady overall at 01:10:32. The next three green vests over the line were Hamish Shankland at 01:12:28, Ewan Jelly at 01:13:12 and Grant Wooler at 01.13.43.  Bob Brown and Peter Ritchie completed their marathon training for going Dutch in Rotterdam on Sunday with times of 01:17:23 and 01:19:33 respectively. Carnegie Harriers had a good day out scooping both the Women’s and Men’s team prizes.

Edinburgh Zoo’s Tian Tian and Yang Guan may have timing problems, not so Perth’s Panda who had no difficulties finishing well within the top 100 in a respectable time of 01:38:45. Sue’s efforts in aid of the Perth branch of the Samaritans will be repeated over 26.2 miles at Sunday’s London marathon http://uk.virginmoneygiving.com/SueJones100

PRRs thanks all who supported the Tay Ten plus the race sponsors Sweatshop, Highland Spring and Tunnocks.  The post-race massage, courtesy of Caledonian Physiotherapy Services, was welcomed by all.