The big event at the weekend was the last championship race of the season.18 Green vests made the trip to Templeton woods in Dundee for their annual 10 mile race.
Good condition prevailed which was good considering it’s a tough hilly track.
Duncan Ryan was first home from the runners and 12th overall in a cracking time of 65 mins.Jimmy Fotheringham was next In 67 mins.Dave Macfadyen continued his good season managing 72 mins.Grant Wooler 73 mins,Richard Ward 74mins,Stewart Reid 77 mins,Sojia Crow 78 mins and first female PRR. Home,Barry Campbell 79 mins,Kenny Stewart 81 mins,Roy Mitchell 83 mins,Sue Jones 89 mins Peter Ritchie 98 mins and 11 secs,Gillian Smith 98 mins and 28 secs,Sally Newton 103 mins,Eleanor Paul and Caroline Hogarth 114 mins Caroline Ness 118 mins and Bringing the runners home in 129 mins was Jean MCullough.
Duncan Ryan,Jimmy Fotheringham and Dave Macfadyen picked up the 3rd best team home.
Another we’ll run event from the Dundee Road Runners.
The 103 rd Perth Parkrun took place at the weekend with 13 Green vests taking part out of a field of 145.Tricky conditions are now the norm with leaves covering most of the run making it slippy in places.The grass bank also becoming saturated on the way back.
That said second home was Mike Mcconnell in a time of 17.27 and new PB.Mike Souter was not far behind in 17.48,with a Jimmy Fotheringham next in 18.36,Neil Muir followed in 20.07,Stuart Robertson started late and ran a fantastic 21.10,Ronnie Glen21.43,Kenny Stewart. 22.32,Roy Mitchell22.37,Events Coordinator David Stokoe back from injury ran 24.12,With Tessa Ward and Richard Ward both coming home in 24.30,Linda O”Neill 27.23 with Karen Walters bringing the PRRS home in 32.12.

The Weekend saw the Hartley Relay take place in Dundee. A great turnout from the Perth Road Runners saw The men’s team finish in second place out of 10 teams.They recorded a time of 60.11which was only 27 secs behind the winning team.
The green vests had 4 teams in the mixed event. A magnificent 22 teams took part and the mixed A came second in a time of 56.41. The mixed B finished 8 th in 60.32 with the Mixed C not far behind in 66.35.The Allsorts brought the Perth contingent home in 84.32.
The Road Runners also had 2 junior under 12s teams and they performed brilliantly with the Dees Nuts finishing first in 30.12.The Road Rats were second home in 34.07. The Junior under 16s team the Road Rebels also took the gold medal running 62.50. Great performances were had by all helped by the management expertise of Grant Wooler.
Usual club run on Tuesday at 6.25pm from Bells Sports Centre for any new runners to the club. 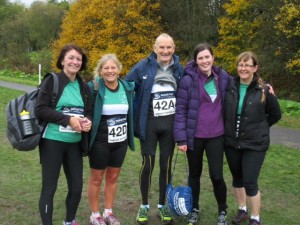 The weather is closing in now but the Green vests are just donning their hats and gloves and getting on with the races in hand Sue Jones however decided to fly south to Valencia in Spain to run their marathon.Sue ran a great race in nice sunny condition managing 3hrs 57 mins.Almost as warm as the time she run the London marathon in a panda suit,
The Glen Clova half marathon also took place at the weekend with 273 runners taking part.Jimmy Fotheringham was first back for the runners in 17 th position overall in a time of 1hr 27 and 39 secs followed closely by Stuart Robertson in 1.28.03 Kevin Rogers ran well after a long season to post a time of 1.32.10. This gained the trio third in the team prize event.Ewan Jelly was next in 1.45.35 with Marianne McLevy running 2.03.08 and the only female Perth Road Runner taking part.
The 104 th Perth Parkrun took place with 13 green vests taking part.
Mike Mconnell was first home in 17.49 despite the muddy conditions coming back.Kevin Riddell ran well in 18.39,Ronnie Glen managed 20.36 with Kenny Stewart running his usual consistent self in 22.36,Fiona Manson 22.48, Steven Gilbert 23.51,Gillian Smith equaling her PB in 25.59, Caroline Hogarth 28.52,Linda ONeill 29.21, Robin Wombill 30.53,Karen Walters 30.59,Jean Mcullough 31.41 and Fiona Morrison 35.31 brought the Perth contingent home.
Runners are reminded that the AGM is at Craigie Hill Golf Club on Monday the 30th of November at 7.15pm.
Normal club run on Tuesday at 6.25pm at Bells sports centre for existing and any new potential members.
Thursday night sees the return to Corsie hill for interval training with legendary coach Colin Keogh. 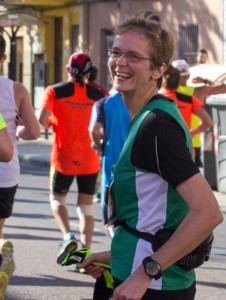 Sue (minus Panda) at Valencia marathon

Another Busy weekend saw the Perth Road Runners take on the cross country at Alloa and the first in the series of the frostbite trail races which comprise 4 races in the beautiful surroundings of Falkland Estate.
At the cross country a very muddy route saw Claire Douglas first of the ladies home in 40th position after running two laps in 29 mins 34 secs. Sonjia Crow was just behind in 29.54 with Fiona Manson running 33.33.
The men had to complete 3 laps of the same course and Myles Bax finished 22 nd overall out of over 300 runners in a splendid time of 33mins 54 secs.Mike Mconnell ran well to post 35.34,Dave Knight managed 37.09 With Mark Dunn next home in 39.14.Jimmy Fotheringham 39.40,Kevin Riddell 39.51.Kevin Rogers 42.02, Ronnie Glen 42.31,Simon Grieshaber cruised home in 44.35 as he has a marathon in Lanzarote to complete in 3 weeks time.Mike Dales ran 49.32 and Dave the “Red Squirrel ” Wood managed 53.11 on his comeback run.A great turnout from the green vests.
At The Frostbite race 205 runners took part and Stuart Fraser was first PRR home In 12th place in 25.01 closely followed by Neil Muir in 25.21,Elvis Reid was next in 26.43 with Richard Ward just behind in 26.46.Richard Hughes ran well to come home in 28.47,Gillian Smith was next in 35.34 and Margaret Mcintosh running well in 37.08.Caroline Hogarth 37.43,Stewart Dallas 37.50,Sally Newton 39.43,Eleanor Paul completed the runners home in 41.04.
Great running from all involved and the club is going from strength to strength.However new members are very welcome.
Come along at 6.25pm to Bells Sports Centre on Tuesday’s nights to have a run in a group that suits your your ability.
Thursday night returns to the George Duncan running track for interval training. Runners are reminded that The AGM is on Monday night at 7.15 pm at Craigie Hill Golf Club. 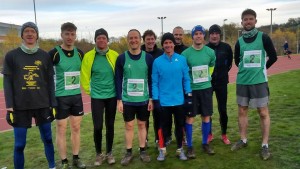