Mel MacRae also notched up a time of 33.21 earlier this year at the Newburgh 4.23 mile Road Race held previously in July.

Both Neil Muir and Steve Ferguson travelled West recently and represented the club at the Isle of Mull Half Marathon on the 11th of August, this was the 25th anniversary of this race. Neil Muir in a time of 1.24.23 finished in 6th place overall whilst Steve Ferguson finished in 11th overall in a time of 1.29.20, both impressive times on the day with a field of just under 100 runners and running into a stiff headwind.

Caroline Jones of Perth Road Runners was the sole representative from the club to travel to the Nigel Barge memorial 10k Road Race at Garscube over the weekend. Caroline produced a respectable time of 45.03 on the day.

The Forfar 10k road race, hosted by Forfar Road Runners has become an increasingly popular fixture in the local athletics calendar, and receives a large number of entries, 298 on the day. Bob Brown finishing in a time of 45.31, was followed by Peter Ritchie in 48.16.

Forfar Road Runners also host the annual Glen Clova Half Marathon, infamous for its popularity among local clubs, the race sells out notoriously quickly, and this year was no exception, selling out in just over 2 and a half hours. Of those lucky enough to secure a place in the race, Bob Brown, Ewan Jelly, Mark Leach and Peter Ritchie will all be representing the club on Sunday the 9th of November.

Perth’s friendly running club are continually looking to strengthen their numbers, regardless of age or ability, all runners new or experienced are welcome. Our Tuesday club training runs which vary in distance and difficulty are the perfect way to get a feel for the club and to see if it’s for you. Starting from 6.30pm every Tuesday, meet at the foyer of Bells Sports Centre, Perth, where you will be introduced to club members and we will be able to find a group suited to your abilities. For more information on the club and other training opportunities visit, www.perthroadrunners.co.uk. 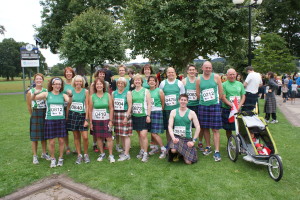 We did it, or did we? Apparently so! Perth, Scotland can now proudly lay claim to the official world record for the most runners simultaneously clad in kilts, though we perhaps shouldn’t be too smug, just yet anyway, as our Canadian counterparts still managed a greater number of runners! Perth’s band of friendly Green vested runners were proud to be able to add to the City’s attempt and turned out on the day to experience the festival and clocked some fast times over the 5km distance too. Duncan Ryan 18.40, Fiona Angus 21.20, Allison Brown 22.01, Chris Paton 22.25, Sue Jones 23.35, Barry Campbell 25.03, Allison McArthur 25.11, Linda O’Neil 26.36, Susan Smith 27.25, Karen Walters 30.43, Maureen Summers 31.33, Alan Paterson 31.24, Greig Ramsay 35.01, Julie Ramsay 35.02, Kirsty Johnston 39.18.

Fife AC held their annual Ceres 8 mile road race on Tuesday evening, the club was represented by Bob Brown and Peter Ritchie. Both Runners clocked impressive times over the course which includes a number of significant climbs, and notable descent into Ceres for the finish line. Bob Brown stopped the clock on 57min 51sec and was followed by Peter Ritchie who finished the course in 1hr 5mins! 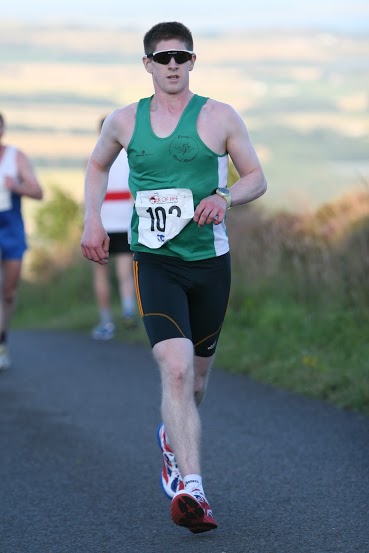 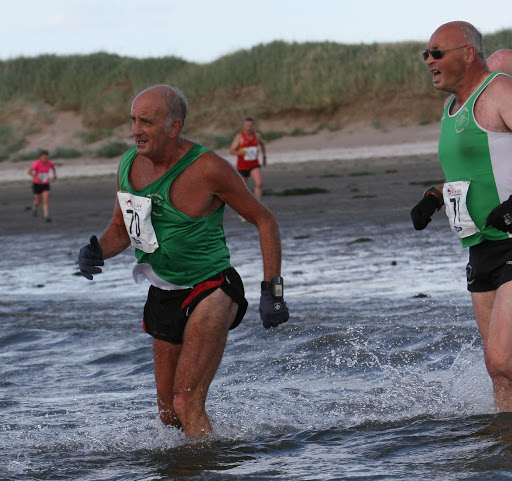 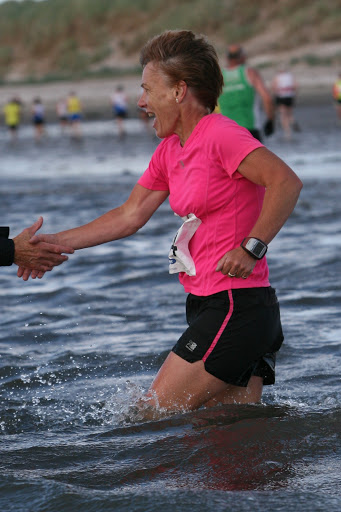 A quartet of Perth’s Green vests were this year entered into the John R.Wier Tour of Fife, now an annual fixture on the Athletics calendar. Organised by Fife Ac, the series saw competitors compete over the course of 5 days from Wednesday through to Sunday last week, and included a number of physically and mentally challenging courses, as the course distance played second fiddle to the experience. Perth Road Runners were this year represented by Bob Brown, Peter Ritchie, Alyson MacPherson and Chris Paton. The ‘Tour’ kicked off at the old mansion house by Falkland on Wednesday evening with the 4.8 mile trail race. On Thursday the Tour traveled to Tarvit for a second 4.8 mile trail race, starting and finishing in the grounds of Tarvit Hill. Friday night however was perhaps the most challenging as the field took on the ‘Up Hell’ Time Trial ascending 783ft in a little under 1.5 miles and against the clock, this was no challenge to take lightly. Locals and Tourists alike may have been forgiven for having flash backs to the Olympic opening ceremony on Saturday evening, as the West Sands at St Andrews was the venue for the 4.2 mile ‘Chariots of Fire’ beach race, the Tour came to a close on Sunday as the field returned for a final visit to Falkland and a final 3.8 mile trail race aptly named ‘Skull Mountain’ where the darkened ‘Tunnel of Terror’ lay in wait, with not all competitors emerging unscathed! As the Tour came to a close the club where able to finish in a celebratory style as Bob Brown collected 1st place M65 and Alyson MacPherson saw off her nearest competitors to claim 1st place F50.

Another early rise on a Saturday morning could only mean one thing…It was another rain soaked outing to to the West highland way for the Wombill’s over the weekend as Robin and Anne, numbers 1 and 2 respectively, completed the 43 mile Devil O’ the Highlands ultra mountain marathon and crossed the line together in 11 hours 48 mins 59 secs!

Helenburgh AC played host to their annual club half marathon the, Babcock Helensburgh Half Marathon on Sunday 4th of August. Simon Grieshaber, the only representative from PRR to make the drive west on the day,put in a solid performance to record a comfortable 1.33.45 over the 13.1 mile distance.

With this summers heatwave finally abating during last week, Perth’s green vested runners continued in their efforts to a pick up a club championship medal at the end of the year. The next stop of the fixture list was the Ballater 10 mile road race. Stuart Robertson led from the front in a time of 1:02:22 notching up an impressive 6th place finish, shortly behind James Fotheringham finished in 1:07:45 sneaking inside the top 20 to finish 19th overall. Mark Leach, Hugh Daly and Bob Brown were his closest competitors finishing in 1:11:00, 1:15:03 and 1:15:12 respectively. Peter Ritchie finished the course in 1:18:50 with Barry Campbell closing him down with a finishing time of 1:19:22. Allison Brown was the first of Perth’s Ladies to finish and did so in a time of 1:21:37. Melanie Macrae not far behind finished in 1:23:23. Sue Jones and Beth Lardner could only be split by a matter of seconds both finishing in 1:25:49 and 1:26:12 respectively. Fiona Hair completed the 10 mile course in a time of 1:32:11 in front of Kenneth Stewart 1:34.27 and Susan Smith 1.34.40. Linda O’Neil finished in 1:35:46 whilst Alan Paterson and Rhona McBean finished in 1:43:44 and 1:47:36.

A number of Perth’s runners will also be participating in the John R.Wier Tour of Fife, a series of 5 races from Wednesday through to Sunday this week, including an uphill time trial more affectionately known as ‘Up Hell’ and the classic Chariots of fire beach race on the West Sands, St Andrews.

The club will also be holding its annual Club Duathlon from Pitcairn Green on Thursday the 8th of August with the annual club handicap Target Zero the following week on Thursday the 15th of August. As such, normal track and hill training will be cancelled on these dates and will resume with Hill training on the 22nd of August.For further information and details visit, www.perthroadrunners.co.uk or find us on Facebook. 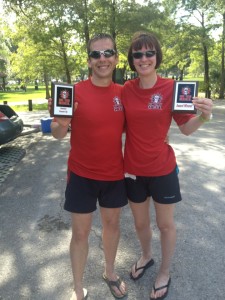 Whilst Perth’ Green vests have been actively enjoying the summer conditions at home PRR pair, Steve Bonthrone and Alison McArthur headed to the states, though not for the relaxing beach holiday many might imagine!. Steven and Alisons holiday trip started with the Watermelon 5k in the Winter Park area of Orlando, held whilst most tourists would still be asleep, at 7am on 4th July, and just 12hrs after they landed, not to mention in 94% humidity! Their 2nd race was three days later with the Run Thru Hell 5k in Tampa. The race is so called as it usually involves a stretch through some woods with the ground rather swampy however they decided it was TOO swampy and kept it to the path. Still in very humid conditions the race was far from easy! Steve finishing in 21:28, 2nd in his age category, whilst Allison finished in 26:44, taking over 2 mins off her PB set in 2010 in the same race. Her time saw her finish 3rd in her age category, achieving her first prize at a race. Their final race was the Cool Summer Mornings 5k at Clermont. The location although next to a lake still saw competitors compete in humidity over 100% with Steve finishing in 21:30, 14th overall and 2nd in his Age Category. Allison however, finishing in 25:51, smashed her PB again and finished 1st in her age category! A Very impressive performance!

Perth friendly running club is always looking to add to its ranks and would be delighted to welcome additional new members, and there’s no excuse not to give it a try, especially with conditions perfect for running. We meet for our weekly club training run at 6.30pm every Tuesday evening at Bell Sports Centre in Perth – Full membership and joining details can be found at www.perthroadrunners.co.uk

The club would also like to commend the efforts of both Peter Ritchie and Alyson MacPherson both completed the 95 mile West Highland Way ultra race at the end of June. Following in the footsteps of  fellow club member Robin Wombill who completed the course in 2012,

Perth Road Runners were represented at last Friday nights White Tops Hill Race, at Kirkton of Auchterhouse, which was hosted by the Dundee Hawkhill Harriers. Mark Leach running a time of 58.09 lead Perth’s Green vested runners, with Mike Dales close behind in 58.43. Paul Grace wasn’t far off the pace with a time of 60.12 ahead of Fiona Morrison in 62.23 and Bob Brown who finished the course in 72.19. A full run down of results and a race report of Wednesday night’s Brig Bash 5 mile will follow next week.

Perth Road Runners are known as the friendly running club and we have proudly brought runners together in Perth for over 25 years. Our philosophy is to inspire and be inspired so all we ask is that you have a pair of running shoes and a sense of humour. We will take care of the rest. If your interested in joining us for our weekly training sessions and/or at the many races our members enjoy participating simply head to our website at www.perthroadrunners.co.uk, where all our membership information is available.