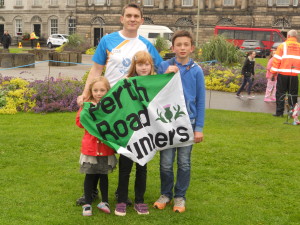 Perth Road Runner Duncan Ryan was pleased to be one of the baton bearers in Perthshire on Friday 4th July when he was selected to take part in the Queens Baton Relay.  Duncan carried the baton in Blairgowrie where around 2,000 people gathered in the Wellmeadow and lined the streets to cheer on the bearers.  Completing 14 marathons over the last few years in places like New York, Paris, Boston, Chicago, London, Berlin, Edinburgh and Loch Ness, Duncan was nominated for raising over £12,000 for charities including Help the Hospices, MacMillan, CLIC Sargent and Kinnoull Church Nursery.

After completing his section of the Relay, Duncan was joined by his family on the North Inch to see the arrival of the baton there where it was carried on stage by the 1986 Commonwealth Games Gold medal winner Dan Travers.  Duncan commented that the photo with his children made a memorable day particularly special.