The sun shone in the Fair City for the annual Perth 10k road race. The new flat fast course tempted a field of over 400 runners with PRRs fielding 26 contenders chasing PBs in the eighth race of the Club Championship series. Fast man Stuart Robertson was first over the line for PRRs in in 37:33 in 12th place overall, lifting the trophy for first local male home. Duncan Ryan at 38.10 in another top 20 placing was runner- up for Perth. James Fotheringham notched up a new PB at 38.50 making up Perth’s top 3. Derek McIntosh and Mark Leach stormed home seconds apart at 41:24 and 41:40.

Claire Douglas at 42:08 was first Perth lady over the line picking up 3rd in age category honours. Close behind, 2nd lady Julie Ramsay put in another competitive performance at 42:44. Grant Strachan and Simon Grieshaber sprinted for the line seconds apart at 43:51 and 43:54. Perth’s 3rd lady was Fiona Angus in 45:45. The next wave of six green vests saw Steven Gilbert and Richard Ward battle it out at 46:42 and 46:46, followed by Alison McCoist and Amy Grieg seconds apart at 47:00 and 47:13 with John Rudd finishing strongly at 48:22 and David Wood achieving 49:13 a few months back from injury.

With the temperature rising Fiona Hair ran well at 53:46 scooping 3rd female vet over 60 while running partner Susan Smith achieved a sub 50 time of 54:59. Beth Gripton with an injured foot crossed the line in 57:15 followed a minute later by Linda O’Neill in 58:20. Sally Newton finished in 01:00:06. Linton Scarborough coached a runner around the course finishing in 01:01:08 while Daile Sipple ran/walked the second half with a calf injury crossing the line in 01:02:34. Hugh Daly had a relaxing run with Antipodeans from Perth down under, finishing in 01:07:34. Jean McCullough and Fiona Morrison completed the field for Perth in 01:09:54 and 01:20:06. To complete the day, junior star Gregor Ryan won the 3km junior fun run while his sister Rose was runner-up and first in her age group. On 23 August super veteran runner Peter Ritchie showed his true grit once again, completing the 36.5 miles Speyside Way Ultra Marathon in a remarkable time of 06:46:23. 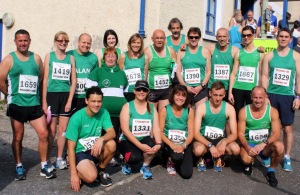 Galloping through Gateside to the end of the Summer Series, Perth Road Runners contested the tough 4- mile multi terrain race, the Gateside Gallop on 3rd September. In a record field of nearly 120 runners, Brian Cooper led the Club home in 26:48, securing 15th overall. Derek McIntosh was runner up for Perth in 28:55, followed less than 30 seconds later by Claire Douglas, Perth’s first lady in 29:15 who once again scooped honours as first female in her age group. The Perth men’s top 3 was completed by Grant Wooler in 29:31 clinching 3rd male vet over 50 and the men’s trophy for the Series.

The next green vest to cross the line was David Hunter in 32.50, followed by Melanie MacRae in 34:08, strongly completing her challenge for the Ladies trophy. Peter Ritchie put in a strong 35:57. Fiona Hair continued to contest the women’s top 3 in the Series finishing 40:07 and second lady in her age category. Three green vested ladies completed the PRRs challenge with Rhona McBean in 48:26, Jean McCullough in 54:51 and Fiona Morrison in 55:08. Personal bests and prizes were the theme for the day at Aberfeldy on 6 September when nine PRRs took to the road in near perfect running conditions at the Highland Perthshire Marathon and Half Marathon. 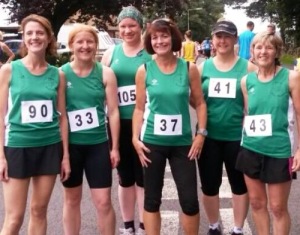 Neil Muir led the PRRs home in style completing his first marathon in 6 years sprinting over the line in 03:08:35 in 13th place overall and 4th in his age category. Runner-up for Perth, Mark Leach clinched a new PB for the marathon distance in a fantastic 03:23:45. Barry Campbell ran his best marathon time this year in 3:33: 15 shaving more than 4 minutes off his Edinburgh marathon time. Fresh from Speyside Way ultra race, Peter Ritchie achieved a superb sub 4 hour time of 03:49:40. Contesting his 98th marathon, Kenneth Stewart did his best time this year in 03:53:18 and picked up the prize for first male over 60. Hamish Shankland stormed over the line in a sub 4 time of 3:37:56. Unfortunately supervet Bob Brown had to exit at the end of lap 1 due to a knee injury. In the Half Marathon, Stuart Dallas powered to the finish in 01:44:35 while Vicky Park, running her first half marathon in 4 years, stormed home in a PB time of 01:48:22. Rhona McBean headed eastwards and completed the inaugural Scottish Half Marathon in 02:27:54. 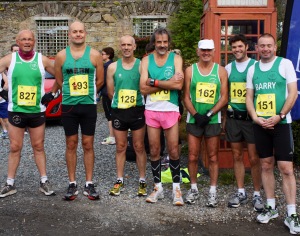 Fresh from the success of the Perth 10k, a PRRs trio travelled to Stirling for the annual 10k, which doubles as the Scottish 10k Championships. Stuart Robertson led the PRRs home with a blistering PB performance of 37:03, followed by James Fotheringham in 40:37, pacing Angela Irving to a storming 40:35 finish.

Early autumn sunshine in Highland Perthshire attracted a record turnout of over 320 runners to the Pitlochry 10k.   PRRs fielded 23 contenders chasing Championship points in the penultimate race of the Series.

Only 30 seconds separated the Perth top three as David Hunter fronted the PRR’s attack in an impressive 37:07, followed closely by PRRs runner-up Stuart Robertson in 37:19 and Duncan Ryan at 37:40, taking 13th place overall. James Fotheringham secured another top 20 placing and notched up a new PB at 38:31. Neil Muir put in another competitive performance at 40:30.

Fresh from the Scottish Championships, Angela Irving was first Perth female across the line in a superb 41:22. Grant Wooler and Julie Ramsay stormed home a second apart at 43:02 and 43:03 to give Julie PRRs 2nd female. Nicola Crowe completed the Perth women’s top 3 with a season’s best performance at 43:44. Kenneth Stewart and Simon Grieshaber battled it out for the line finishing 45:35 and 45:37 as Kenneth put in his best 10k time this year. Peter Ritchie and Vicky Park fought a close contest finishing 47:37 and 47:38 with Peter achieving a season’s best. David Wood improved his Perth 10k performance with a solid 48:35. New club member Amy Cantwell made an impressive debut with a sub 50 time of 49:20. Sue Jones smashed her previous 10k by 2 minutes at 50:31. Fiona Hair once again picked up honours for Perth with 3rd female vet over 60 prize in a time of 54:41. A trio of green vests crossed the line over the next three minutes with Rachael Gibson at 55:05, Susan Smith at 56:15 and Alan Paterson at 58:09. Sally Newton completed the race in 60:23 followed by Jean McCullough in 63:04 with Fiona Morrison and Fiona Proven crossing the line together in 72:26. To complete the day, rising star Jordan Strachan lifted the prize for 2nd Junior in a competitive time of 40:41.

Mike Dales and Fiona Manson crossed the sea to the Emerald Isle to complete the Mizen to Malin cycle ride, the Irish equivalent of Land’s End to John O’Groats. They also ran the Derry Parkrun finishing in 12th and 14th places respectively.