A perfect autumn day on Speyside attracted more than 900 runners to the Aviemore Half Marathon.   11 PRRs contenders travelled north chasing Championship points in the final race of the Series.

Fresh from the success of Pitlochry 10k, David Hunter led the PRR’s home in an impressive 01:19:57 taking 7th place overall. Runner-up Julie Ramsay stormed over the line in 01:33:36 picking up Perth’s first lady honours. Nicola Crowe completed the PRRs top three, and second lady, in a season’s best performance of 01:35:18. Steven Gilbert smashed his Loch Leven time by 9 minutes in a blistering 01:45:10. New club member Amy Cantwell made an impressive half marathon debut with a 01:46:57, followed closely by Alison Mccoist in 01:47:51. David Wood put in a competitive performance at 01:50:55. Alan Paterson completed the championship season in style notching up another PB at 02:10:12, followed closely by Daile Sipple in a respectable 02:10:40 in her first half marathon. Jean McCullough laid the ghost of Mull to rest with a 02:27:19 while Fiona Morrison enjoyed a sub 2:40 performance at 2:34:46, in her season’s first half marathon.

Over the border, Sue Jones and Beth Gripton put in cracking performances in the Yorkshire marathon. Sue smashed her marathon PB by 6 minutes crossing the line in 03:43:17 while Beth, running in her home city of York, put in a competitive performance of 04:10:27.

Duncan Ryan achieved a course best in the Great Scottish Run, completing the half marathon in the city of Glasgow in 01:23:54.   In the Fife AC Giffordtown 5k, Simon Grieshaber put down a strong performance at 20:24. 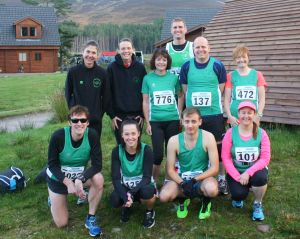 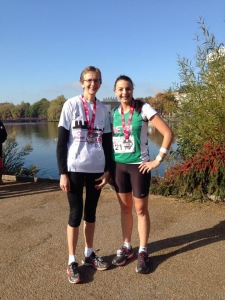 Sue Jones and Beth Gripton with their Yorkshire Marathon medals

The autumn racing season took on an international dimension with PRRs racing around the globe. Peter Ritchie, although hampered by injury, completed the Chicago marathon in a sub 4-hour time of 3.58.48. Meanwhile Duncan Ryan gambled on a 10k in Nevada taking part in the Las Vegas Runners 10k. Duncan’s lucky number was 1 as the race winner. In the Netherlands Bob Brown and Caroline Ness contested a very warm Amsterdam Marathon. Bob’s result is unconfirmed at the time of going to press and Caroline was pleased to complete the course in 5:30:02.

Back on the North Inch, PRRs turned out in force for the 47th Perth parkrun on the occasion of the return of one of PRRs founder members to racing, after a 5 year break. Garmins were turned off as Veronica Muir’s family and road running friends, old and new, turned out to accompany Veronica on her inaugural Perth parkrun. Veronica clocked a respectable sub 45 minute time of 43:09 accompanied by Fiona Morrison, Jean McCullough, Rhona McBean, Beth Gripton and Sue Jones and Neil Muir as Tail Runner.

Angela Irving was 5th overall and first female over the line in a spectacular time of 20:23. Kenneth Stewart crossed the line in 23:01 preparing for his awe- inspiring 100th marathon in Dublin at the end of this month. Other PRR park runners were Susan Smith 25:41, Fiona Hair 27:53, Sally Newton 29:05 and Karen Walters 30:11. 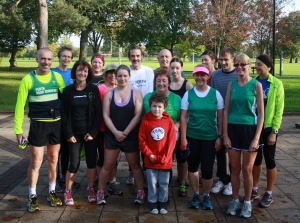