Also on the Saturday, several Road Runners travelled to Falkland in Fife to take part in the Devil’s Burdens, a relay race consisting of four legs with a total distance of 34.5Km. The route around the hills of Falkland involved over 1700m of climbing along West Lomond and Bishop Hill.  Leg one of the race started in Falkland and finished 7.5km later in Strathmiglo. For legs two (Strathmiglo to Kinnesswood) and three (Kinnesswood to Mapsie Den) runners in teams were paired for the 10km, 680m climb and 11.5km, 420m climb respectively.  The final leg was 5.5km from Mapsie Den returning to Falkland and a further 390m of climbing. Each leg required navigation to various check points along the route. Over 150 teams took part, including two teams from Perth Road runners who enjoyed the undulating and challenging course on what was a beautiful sunny day, at least above the above the clouds! The finishing times for the two teams were 5hrs 27mins and 5hrs 35min.

To celebrate the achievements of the club members in the past year, the annual club awards presentation will be held at the Royal George Hotel on 4th February 2017 from 7pm.

Normal club nights are Tuesdays, meeting at Bell’s sports centre for a 6:30pm start. During the winter months the Thursday sessions are track intervals at the George Duncan arena, North Muirton.

The weekend started with ten adventurous club members travelling to Tayport, Fife to take part in the 5k and 10k Run-4-it Tentsmuir torchlit runs organised by John Rudd, also a member of the Road Runners. In freezing conditions with snow on the ground, the routes consisted of trails through the woods and along the beach at Tentsmuir forest.

There was a strong turnout of 23 road runners at Perth parkrun. Although the course was icy in part, Caroline Jones finished in third place with a new personal best time of 19:28. Stuart Fraser, who paced Caroline, finished fourth overall and first male road runner over the line in 19:29.  Personal bests were also achieved by Scott Wood, 21:44 in his second parkrun and Dean Scott in 22:20 at only his third. Debbie Jackson ran the ‘alternative’ course at Linwood parkrun due to flooding so it was a route of four times round the edge of football and rugby pitches. Debbie finished in 45th place and first female in her age category with 28:43.

The final event of the weekend was the second race of the Strathearn trail series. Two green vests ran at the event whilst several others marshalled.  Duncan Ryan finished the 5Km race in first place in 19:59, whilst Julie Ramsay finished seventh overall and second female in 23:03.

Tuesday’s are the regular club nights leaving from Bells sports centre. During the winter months, Thursday night is at George Duncan arena for track sessions, both sessions starting at 6:30pm sharp. New runners are always welcome.  Please check the website and facebook pages for information.

Perth road runner Duncan Ryan competed in the Scottish Indoor 3000m championships at the Emirates Stadium in Glasgow on January 4th, achieving a new personal best time of 10:08 in the process. This was fourteen seconds quicker than his previous best at the distance.

There was another strong turnout at Perth Parkrun on Saturday, with the second highest number of runners since the inaugural run in November 2013. 259 runners participated, 31 of which were green vests. Stuart Fraser was first road runner across the line and 3rd overall in a time of 18:46. Mark Dunn finished closely behind in fourth place with 19:09. Caroline Jones was first female finisher in 19:46, a new personal best time. Despite the tricky conditions underfoot, Marlena Nowaczyk, Stephanie Reid and Caroline Malloy also gained new personal best times of 22:27, 26:56 and 28:24 respectively. Elsewhere, Angela Irving finished 19th overall and 2nd female at Falkirk parkrun in 21:28.

Six Road Runners travelled to Edinburgh on Saturday for the first race of the New Year, the Great Edinburgh winter run, involving a tough, hilly 5km course around Arthur’s seat. Amongst a field of over 3000 runners, in ideal running conditions for January, Alistair Gudgin finished in 13th place with 17:45, followed by Duncan Ryan in 19th place in 18:09. Claire Douglas finished in 22:06, followed closely by Gillian McGuire in 22:30 with Caroline Hogarth 29:40 and Eleanor Paul in 29:41. A team of club members also helped marshal the elite cross-country event where Calum Hawkins and Mo Farah competed in Holyrood park.

To round off another busy week, three green vests travelled to Fife for the first of three races in the Trailbuster series at Balbirnie Park, Markinch. The course involved two 3.5-mile laps of the park, including crossing streams and two challenging hill climbs. Neil Muir was first green vest and 21st overall in 25:15, followed by David Stokoe 27:47 in 41st position. Nicola Crowe 35:43 was the sole female road runner competing.

The club meets regularly on Tuesday night at Bells Sports centre for a 6:30pm start. The Thursday session is track intervals at the George Duncan Arena. New runners are always welcome; please contact us via Facebook or the club website for more information.

Saturday 31st December saw 35 green vests in a line-up of 230 runners for the last Perth Parkrun of 2016. Myles Bax finished first with a new personal best of 16:35, followed by Kevin Riddell in fourth with 18:42 and Stuart Fraser in 19:32, seventh overall. Gillian Edwards was first female road runner home in 23:26, followed closely by Lorraine MacPherson in 24:03 and Ella Webley in 25:13.

The parkrun was also the final run for many green vets who had been undertaking the Marcothon challenge throughout December. Over 40 club members completed the challenge by running for at least 25 minutes or 5km each day during the month, an impressive commitment during the festivities. Many runners clocked up over 100 miles in the process.
On New Year’s Day, 30 Road Runners participated in Perth parkrun in a field of 210 runners. Stuart Robertson was second overall finishing in 18:09, while Stephanie Reid started 2017 with a new personal best time of 27:53. If one parkrun wasn’t enough, 15 road runners then travelled to Dundee to complete the Camperdown event later that morning. Stuart Robertson was second in 19:13, followed by Kevin Riddell 19:32, Neil Muir 21:30, Simon Grieshaber 22:38, Gillian Edwards 24:36, Gillian Smith 29:14 and Linda O’Neill 29:34, all achieving course personal bests in the process.

To finish the weekend of running, 15 Road runners travelled north for the final race of the day, the Blairgowrie New Year’s Day run. Mike Carroll finished the 3.7 mile course in first place with 19:55 whilst Duncan Ryan finished sixth in 21:59, closely followed by Kevin Riddell in seventh with 22:54. Sonjia Crow was third female overall in 26:03 and Gillian Edwards finished eighth in 29:09. 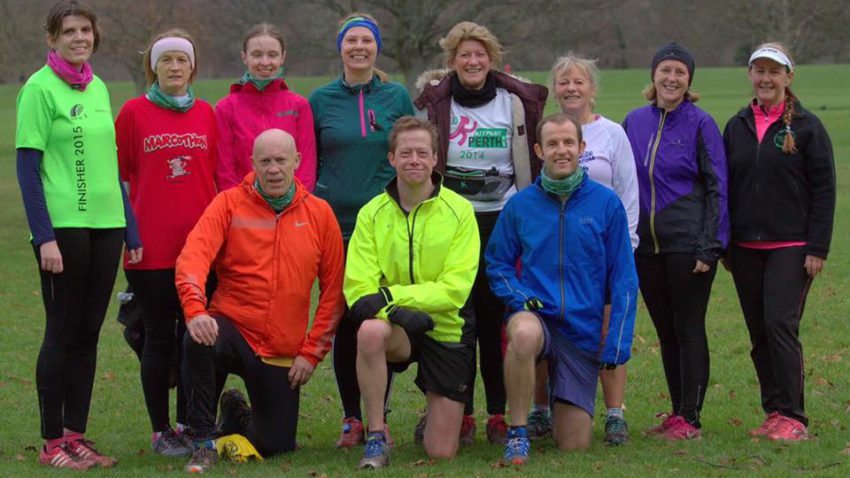